Whether proceedings under Section 138 and 141 of N.I. Act, 1881 can be initiated against Corporate Debtor during Moratorium period?

CentrikBlogsLegal AdvisoryAuthentic Legal AdviceCheque Bouncing Versus Insolvency– Whether proceedings under Section 138 and 141 of N.I. Act, 1881 can be initiated against Corporate Debtor during Moratorium period? 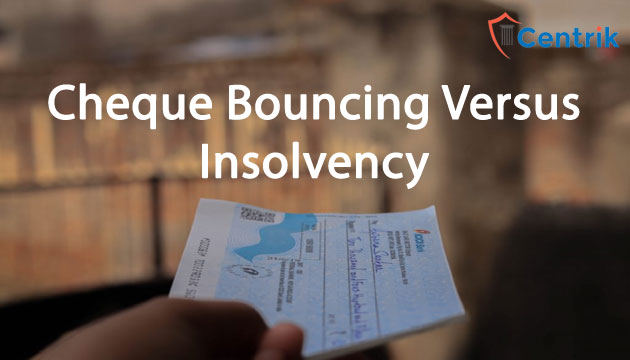 The question was whether the institution or continuation of a proceeding of dishonour of cheque against company(ies) under the provisions of Negotiable Instruments Act, 1888 (for short “NI Act”) fall within the ambit of moratorium provision of the Insolvency and Bankruptcy Code, 2016 (for short “I&B Code”).

Petitioner’s (Corporate Debtor) was arrayed as one of the accused in case(s) pending before the Subordinate courts for the offences under Section 138, 141 and 142 of the Negotiable Instruments Act, 1881.

As per the request of the Petitioner company, the Complainant Company agreed to supply the “Material” and supplied the same. During the course of business, the accused Company was due and payable to the Respondent Company for the supply made. For the said purpose other Director of the accused company had issued multiple cheques but the said cheques were dishonoured with a remark of “Payment Stopped by the Drawers”. Hence, the Respondent had filed the complaints before Judicial Magistrates’ Court.

Petitioners/Accused alleged that no legal notice was served by the Respondent, hence the complaint under Section 138 NI Act was legally unsustainable and in view of the same while challenging the said complaint, present petition was filed.

High Court reiterated that, the criminal liability of natural persons in case of a complaint filed under Sections 138 and 141 of the NI Act, would survive, but would not be attracted against the company.

At the time of hearing, the Court noted that in the present case, the insolvency process was initiated by NCLT, and a moratorium had been declared under the Insolvency and Bankruptcy Code against the company.

The Court discussed/referred a decision passed by the Hon’ble Supreme Court in “P. Mohanraj v. Shah Brothers Ispat (P) Ltd., (2021) 6 SCC 258”, wherein it was held that the moratorium provision contained in Section 14 of the Insolvency Bankruptcy Code, would apply only to corporate debtor, the natural persons mentioned in Section 141 continuing to be statutorily liable under Chapter XVII of the Negotiable Instrument Act.

The Supreme Court ruled that when an order of moratorium is in force under the Code, a parallel proceeding under Section 138 or 141 of the NI Act against a corporate debtor cannot be allowed to continue because the same shall fall under the relief of Section 14(1)(a) of the Code.

Simply put, when a Corporate Insolvency Resolution Proceeding (“CIRP”) is pending under the Code, then during such pendency, a parallel proceeding of dishonour of cheque against a corporate debtor cannot be instituted (and if already instituted, cannot continue) under Section 138 or 141 of the NI Act.

In view of the above, the High Court expressed that, the moratorium was only in respect of the Corporate Debtor and not in respect of the directors/management and therefore other Petitioners as natural persons were liable for prosecution.

However, in view of the declaration of moratorium by NCLT, the prosecution against the company cannot be allowed to continue.

In view of the above, Court quashed the proceedings in respect of 1st petitioner and with regard to the rest of the petitioners, Court opined that the issue was trial and required an appreciation of evidence and this Court cannot decide the same in exercise of its jurisdiction under Section 482 of CrPC.