Extension of the completion of CIRP beyond 330 days 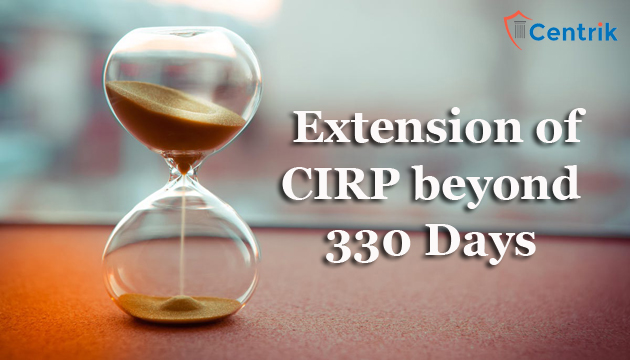 The scheme of the Insolvency & Bankruptcy Code, 2016 is to ensure the restructuring of a company/corporate debtor under distress by providing relief to its creditors, within a stipulated period. The time specified for the completion of the corporate insolvency resolution process is 330 days as has been laid by the legislature. The intention behind keeping the process in a time-bound manner is to guarantee relief to the already aggrieved creditors of the company. However, the timeline can be altered by extending it for 30 days, if the Adjudicating Authority feels the need for the same.

Can we go beyond the given date of three thirty days?

The answer question in the discussion is yes. The proviso of Section 12, which was amended in the year 2019, of the IBC 2016 prescribes “The CIR process shall mandatorily be completed within a period of three hundred and thirty days from the insolvency commencement date”.

The above proviso, by using the word shall mandatorily, had made it impossible to complete the entire CIR process in a maximum period of given three thirty days including the time taken in the legal proceeding of the process.

In cases under the insolvency act, where there is a very large number of stakeholders, most of the cases, it is impossible to reach an agreement in a hard time-bound manner. To make things simpler supreme court in a landmark judgment of the Essar steel vs. Satish Kumar Judgment dated 15.11.2019 in Civil Appeal No. 8766-67 OF 2019 has struck down the word “Mandatorily” as being arbitrary under article 14 of the constitution of India and called them an excessive and unreasonable restriction on the litigant’s right to carry on business under article 19(1)(g) of the constitution. Therefore, the CIRP should be ordinarily completed in the prescribed 330 days timeline, but the said limit can be extended where inter-alia only a short period is left for the completion of CIRP beyond 330 days. In this case, the court said that “if it can be shown to the adjudicating authority and/or Appellate Tribunal under the code that only a short period is left for the completion of the insolvency resolution process beyond 330 days, and that it would be in the interest of all stakeholders that the corporate debtor be put back on its feet instead of being sent into liquidation”.

Hon’ble Tribunal has granted an extension to the CIR process and said “If granting of 90 days helps the Corporate Debtor to revive, then the basic objective of the I&B Code, 2016 will be met. Liquidation is the last resort. Hence, this ‘Tribunal’ is of the subjective opinion that no prejudice will be caused in allowing the instant appeal to prevent an aberration of justice and to promote the substantial cause of justice”. This is an exceptional case as revealed from the submissions by the Ld. counsel for the Appellant. No doubt, CBI and ED have attached the sole property of the Corporate Debtor (CD) and the matter is under adjudication.

The above-discussed proviso has made it mandatory to complete the whole process in the prescribed three thirty days has thwarted the very purpose of the code and was contradictory to the objective of the code.