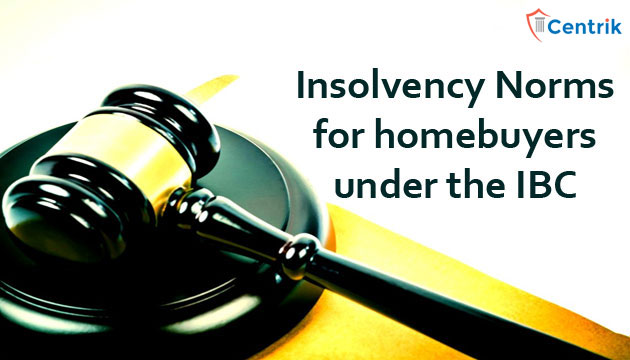 As per our research and latest updates, The Central Govt. may change The Insolvency and Bankruptcy Code (IBC) which may affect the rights of homebuyers regarding the filing of IBC petition before NCLT against the delay in possession or delay in construction.

As per the sources, the Ministry of Corporate Affairs (MCA) may soon likely to move amendments to the code, including protection for new buyers and tighter norms for home buyers in terms of taking developers to the NCLT. Some of the changes which the Cabinet may likely bring are as under:

The cabinet is also likely to announce stricter norms for homebuyers taking developers for insolvency proceedings under IBC.

In October, Corporate Affair Secretary Injeti Srinivas said the ministry spoke about setting up of a threshold for home buyers for starting insolvency proceedings against real estate developers.

Srinivas had said the ministry is also looking at a distribution formula for financial and operational creditors to create a hybrid system of auction of properties with a rigorous examination of resolution applicants to make the system more transparent and legal hassle free.

“There is a feedback from housing and urban affairs ministry and other quarters such as real estate industry that this has to be looked at, and some threshold approach has to be followed”

However, after the above likely change of the IBC laws, the association of Home buyers, have written representation arguing Prime Minister Narendra Modi’s intervention to stop any move to restrict home buyers from moving the NCLT.

In the next amendment, the ministry may also bring in the much-anticipated cross-border insolvency norms under the IBC. Once approved by the Cabinet, the amendments are likely to be passed by Parliament in the on-gong winter session. If approved, these amendments would be the latest to join a number of changes and additions to the three-year-old IBC, after MCA earlier this month notified the rules for resolution of systemically important financial services providers (FSPs) under the bankruptcy law.

The addition had almost an immediate impact as the Reserve Bank of India (RBI) last week announced the replacement of the defaulting lender Dewan Housing Finance Corporation Ltd (DHFL) and said that it would soon initiate insolvency proceedings against the company.

Disclaimer – The above article is based on the news, publication and views from different sources. We don’t certify any of the information contained therein. The readers are expected to take expertise opinion before relying on the article. For any clarifications, please write to us at support@centrik.in.