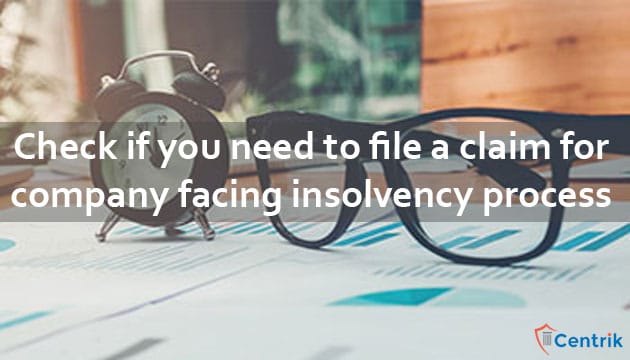 In the month of August, 2019, several companies have been admitted for insolvency process out of which many are real estate firms. Some of the companies which have gone for insolvency (CIRP) under Insolvency & Bankruptcy Code, 2016 (IBC) by the order of NCLT (National Company Law Tribunal) are as under :

The insolvency against real estate firms have caught pace after the landmark Judgement of Hon’ble Supreme Court dated 09.08.2019 in the case of Pioneer Urban Land & Infrastructure Ltd Vs  UOI where it was held that homebuyer can file Insolvency petition if the default has occurred. Further, the SC ruled that IBC laws would override the RERA laws in case any conflict between the two arises. .

HOW DOES IT AFFECT YOU ?

HOW TO FILE CLAIM

Filing of claim is compulsory to claim your money/assets from the company which has been admitted into insolvency proceedings. There are different forms and process to file claim for different types of creditors and its class. Summary of forms are as under :

All the forms shall be filed in the prescribed manner as directed by the IRP and through the mode as given. For the purpose of resolution plan, distribution or liquidation, only the claim which has been filed and admitted by IRP shall be considered

WHAT AFTER FILING OF CLAIM

Once the claim is filed, the appointed IRP shall form the committee of creditors (COC) which shall comprise of Financial Creditors. The COC shall be responsible to take decision about the resolution plan and other matters pertaining to the running of the company and disposal of its assets.

Filing of claim before the appointed IRP within prescribed time is compulsory to be part of the committee of creditors.  The creditors who have filed their claims and which shall be admitted will only be considered for its repayment or settlement or other resolution. In order to avoid rejection of the claims, the filing of claim should be done by an expert person having knowledge of Insolvency laws.

Disclaimer  – The above article is for general awareness of the public about the claim filing process. We do not intend to defame any company or person. The legal situation may change in the future. The readers are expected to take expert advice before relying on this article.