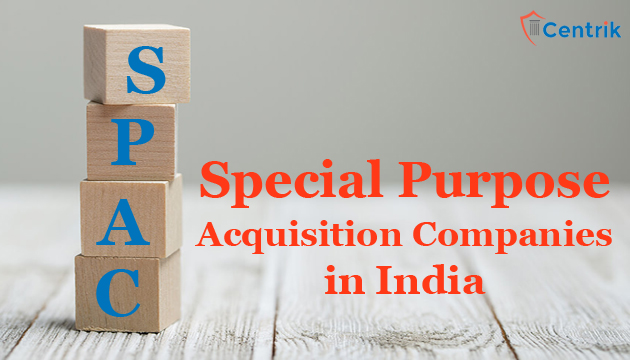 For a business grow it requires the talent of the individuals and money. Money is something that is the most important financial instrument required for running and developing a business. Sometimes businesses require extra investments to grow. For such an extra investment either the business can take a loan or can get the money from the market through different means like shares etc. Businesses prefer money from the issue of shares, whilst listing is made for the same in Initial Public Offer (IPO). The process is time-consuming, involves significant costs, and the companies listing for the IPO are required to make an exhaustive list of the disclosures as required. After completion of the process and successful issues of the IPO, the private company converts into a public company. But due to the complexities involved in the process, the private companies use an alternative to convert into the public company i.e., the trend was seen in the last years, the private companies form SPACs also known as blank check company.

SPACs are a type of shell companies formed to raise investment through an IPO to acquire & merge with private companies in the future and they do not perform any type of commercial operations i.e., their sole purpose is to raise the capital through an Initial Public Offer (IPO).

Generally, SPACs are established by persons having expertise in their fields to expand their work to a particular sector, such persons invest capital of a nominal amount generally around 20%. They raise the remaining funds via public shareholders through the shares offered in the SPAC IPO. Such funds raised are held in an interest-bearing trust account till a time suitable target is found for the investment, such suitable time is generally two years, if SPAC does not complete the merger or acquisition within that time, it will be closed and the proceeds from the IPO will be returned to SPACs public shareholders.

Why SPACs are becoming popular?

The current Indian regulatory framework does not support the SPAC structure. For example, the Companies Act 2013 authorizes the Registrar of Companies to deregister companies that do not start operations within one year of being included. SPACs usually take 2 years to identify a target and make the right effort. If SPACs are to be made operational in India, provisions that allow for power will have to be included in the Companies Act.

In addition, SEBI (Issue of Capital and Disclosure Requirements) Regulations, 2009, Section 26 sets out the minimum eligibility requirements for public offers. This requires the issuer to be:

It can be seen that the SPACs do not meet any of the above conditions neither the Companies Act 2013 nor the SEBI Regulations and the absence of operational profits, and net tangible assets would prevent SPACs from making an IPO in India.

At present, the Indian legislature has not yet determined any full regulatory requirements for SPACs. However, India’s market regulator, the Securities and Exchange Board of India (SEBI) has set up an expert committee that will look into the possibility of introducing SPACs regulations to India, which may increase the chances of domestic listing for start-ups.

As India’s IPO market is large and mature, SPACs have the potential to succeed in the Indian subcontinent. If India considers the listing of SPACs in India, flexible rules, which include things like inclusion, compliance, and governance, will have to be put in place.

The risk involved to Retail investors

SPACs in India can allow for the introduction of domestic stock exchange start-ups without having to deal with a complex, rigid and expensive listing process. Generally, Start-up uses the SPAC route as a faster, easier listing, therefore, retail investors should be aware of the risks involved in this list.

Clearly, in the US, investors have the right to repurchase their shares and demand a refund of the value of their investment, until a purpose is met. However, in India, the redemption of listed company shares may be illegal, in the absence of certain legal requirements. Therefore, SPAC shares will have to be traded on an exchange, the value of which may decrease or rise sharply, exposing potential investors to risk.

After a re-consolidation, shares of a consolidated business will have to be traded on an exchange and the trend has shown that companies acquired by SPACs are not performing well in the wider US market. Therefore, regulators should set the legal framework by preserving the interests of investors.

As discussed, some of the present laws and regulations are detrimental to the development of SPACs in India. Some of them are old and need to be rebuilt by re-examining the state of the Indian economy. Shell companies need to be explained and commented on these primarily as a money-laundering vehicle that needs to be converted. A special committee needs to be formed to study the impact of SPACs on other countries, especially on revitalizing their start-up industry. SPACs are different from companies that receive standard IPOs so we need specific regulatory rules. The Companies Act should have separate chapters that include the inclusion of SPAC and compliance and governance elements related to its management, board, and shareholders. Upon receipt, SPAC may rule under normal conditions. Similarly, separate arrangements/chapters are required under all applicable laws and requirements. Income tax law may also include SPACs under the current exemptions and reductions that are only available to Start-Ups, VCs, and angelic investors.

McKinsey owns a large Indian market value of about $140 billion. As per its research, it has found that deep financial markets could help generate $100 billion of new revenue each year that would accelerate the growth of the sector. It is time for regulators to reconsider SPACs and help unlock more power in these structures.

It will be popular watch over the years to see how many companies stay tracked and go public and find a targeted company within 2 years and provide returns to the company & related stakeholders.