RERA will not entertain the redevelopment issue of Housing Societies 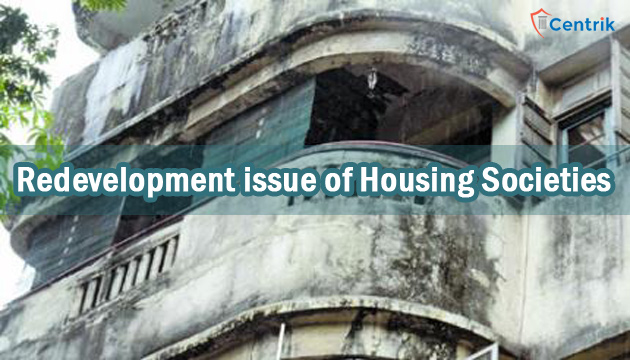 In recent few years the prices of the real estate have touched cloud nine and resident of old buildings finding it a lucrative market condition to allow builders to redevelop their societies to unlock the pricing potential of their property.

Now the question arises that the enactment of Real Estate Regulation and Development Act, 2016 going to give some relief to redevelopment of housing societies or not. In this article we are going to discuss the same.

Recently in MAHARERA a complaint was filed by Residents of a Vikhroli housing society against their builder for failing to give possession of their new flats for 11 years, which was dismissed by RERA authority last month. And in the complaint, society’s managing committee was also accused for granting permission to the builder to add five floors without their approval.

Gautam Chatterjee, MahaRERA chairperson, in the month of December 2017 said that the RERA authority is not the proper forum to resolve the society’s issue with the builder.

The order has wide implications and “The complainants have not been able to point out any contravention or violation of the provisions of the Real Estate (Regulation and Development) Act, 2016 or the rules or regulations,” because over 85% of all constructions in Mumbai involves redevelopments. As per the Housing experts, they warned that thousands of families stranded for years because their redevelopment projects are stuck cannot take recourse under RERA.

Members of Shanti Niketan cooperative housing society assigned Matrix Construction for redevelopment. But till Date, they didn’t received possession of the flats although the building is ready. On May 10, 2017, members of the Shanti Niketan cooperative housing society in Vikhroli (East) filed a complaint against Matrix Construction. According to Members of Shanti Niketan, the 13-storey redeveloped building is ready, but the builder wants to add five more floors. The society said it would allow but have to fulfil all the conditions of members of society.

Complaint said, the managing committee of society manipulated the minutes and gave NOC to the builder without listing these conditions and prior approval of society. However, members agreed to give their NOC to construct five additional floors only on fulfilment of these pre-conditions. And they get to know when they approached Maharashtra Housing and Area Development Authority, and there builder had already procured the NOC without these conditions.

According to MahaRERA order, the dispute is between society members and the builder, this didn’t violate RERA provisions.

The senior of RERA official said that the dispute between society and the society members are resolved under the Cooperative Society Act, but the dispute between the Society and builder is a civil dispute. “In a MahaRera registered project, an aggrieved party will have to point out which provision of Rera Act has been violated,” he said.

Some housing activists like Dharam Shettigar and Chandrashekhar Prabhu has brought many housing societies in Kannamwar Nagar, Vikhroli, said: “This is an obvious lacuna in Rera. Doubtful developers will exploit this loophole even as society members continue to suffer.” And he said, the government brings the necessary changes to RERA or admits that it is of no use to a powerful majority of residents. And the act must be “suitably amended” to protect the benefits of those who are seeking to move to the accommodation with better facilities.

Now at last we can conclude that as of now the dispute of redevelopment between housing societies and builder doesn’t fall under RERA but it might need some attention as it also involves huge stake of the individuals of the housing societies.