Prevalence of IBC over the SARFAESI Act 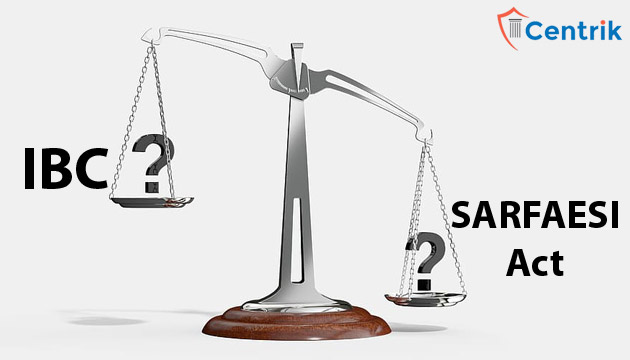 Since the Insolvency and Bankruptcy Code, 2016 (IBC) came into effect on May 28, 2016, the Adjudicating Authorities have affirmed the IBC’s goals through a series of judgments and further proved its prevalence over the other laws of land. The case of Indian Overseas Bank vs RCM Infrastructure Ltd. and Ors. [Company Appeal (AT) (Insolvency) No. 736 of 202 on March 26, 2021] is one such example.

Background of the case:

Ravi Crane and Movers Ltd (“RCM Ltd”/Corporate Debtor) obtained credit from Indian Overseas Bank (“IOB”/Financial Creditor). However, RCM failed to repay its debts to IOB and was categorised as a non-performing asset (NPA) by the RBI in June 2016. In January 2018, IOB submitted a demand notice to RCM under the SARFAESI Act, 2002, requesting that the debt be repaid. Despite the notice, RCM did not pay the debt. As a result, IOB took ownership of two assets that RCM had submitted as collateral for the loan. Following that, IOB issued two e-auction notices to auction the assets. In November 2018, IOB was successful in obtaining an offer for a total of Rs. 32.92 crores for both secured assets in its second effort. IOB accepted the auction/bid, and the bidders deposited 25% of the total bid amount in December 2018. The remaining 75% of the total bid sum was to be deposited within 15 days. Meanwhile, RCM filed a petition under the Insolvency and Bankruptcy Code (IBC).

In the third week of January 2019, IOB submitted its claim for about Rs 79 crores. After NCLT declared a moratorium, bidders paid the rest of 75% of the total offer value to IOB in March 2019. Following that, IOB filed a revised claim under IBC against RCM for Rs. 46 crores. RCM petitioned the Adjudicating Authority to set aside the proceeds from IOB’s sale of its security. IOB’s sale was set aside by the adjudicating body. IOB has filed an appeal with the NCLAT, expressing its dissatisfaction with the order.

The Adjudicating Authority has once again underlined the superiority of the IBC above the SARFAESI Act, emphasising that the IBC is a comprehensive Code in and of itself. Section 238 of the IBC supersedes all other laws. The reasoning of Section 14 of the IBC, which prohibits the institution or continuation of pending litigation or processes against a corporate debtor, remains intact, maximising the value of a corporate debtor’s assets and applying the legislation in letter and spirit.