Can a Homebuyer approach RERA, NCLT and Consumer Court simultaneously? 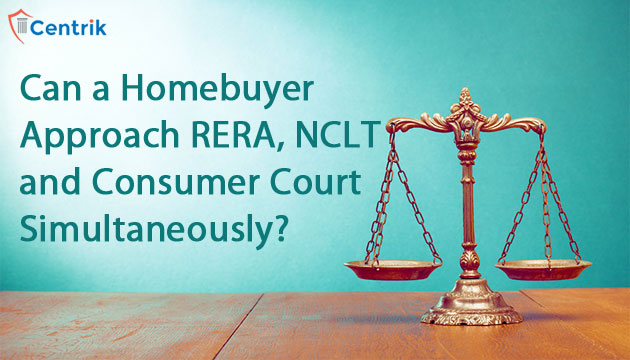 That for years the home buyers were tormented at the hands of the errant developers as the projects in which they invested were either delayed for ages or projects were scraped or the developers are in jail due to which the Homebuyers were left to suffer huge financial losses.

The remedies which these homebuyers had before the year of 2016 were that of the Consumer Protection Act which took ages to reach any conclusive decision. That is the year 2016 two revolutionary laws were implemented i.e. The Real Estate Regulation and Development Act,2016 and The Insolvency Bankruptcy Code, 2016 which completely changed prospects for all the aggrieved homebuyers in the country.  The status of homebuyers was included under the IBC Code,2016 in the year 2018 through the means of an ordinance.

Now, the issue that arose before the aggrieved homebuyers was

That as to what forum to approach and whether they can approach all three of them simultaneously?

RERA VS NCDRC VS NCLT

In the recent judgment passed by the division bench of the High Court of Delhi (“High Court”) dated September 4, 2019 in M/S M3M India Private Limited & Anr Vs Dr Dinesh Sharma, held that remedies to homebuyers under the Consumer Protection Act, 1986 (CPA) and the Real Estate (Regulation and Development) Act, 2016 (RERA) are concurrent or simultaneous and the aggrieved flat purchasers can choose between redressal authorities established under the CPA or the RERA.

Also in the Ajay Nagpal vs Today Homes and Infrastructure Private Limited, Consumer Case No. 1764 Of 2017, the order passed by the National Consumer Redressal Commissioner (National Commission) against which 62 petitions were filed by various developers challenging it, wherein, the National Commission held that the remedies provided under the RERA and Consumer Protection Act are concurrent and moreover the jurisdiction of the forums/ commissions constituted under the CPA isn’t ousted by RERA as per Section 79.

Also, recently a three bench forum of the Supreme Court headed by Justice Rohinton F Nariman delivered a judgment on August 9, 2019 in Pioneer Urban Land and Infrastructure Limited & Anr Vs Union of India & Ors (Writ Petition (Civil) No 43 of 2019) where it was held that remedies given to allottees of flats are concurrent and they are in a position to avail remedies under the CPA, RERA as well the Insolvency and Bankruptcy Code, 2016 (IBC).

From the recent judgments passed by the High Court, the Supreme Court and even the authorities under RERA/ CPA and IBC, it seems the home buyers have multiple forums to their rescue and it depends on them as to under what procures and act or code they wish to proceed.