Are Builders more threaten by NCLT proceedings than RERA? 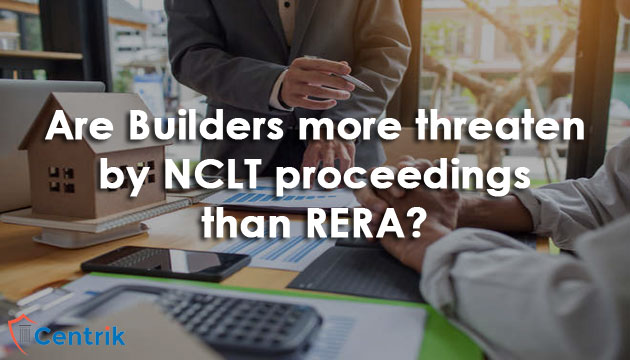 A growing number of Builders, Developers, Promoters and stakeholders in the Real Estate Industry are backing RERA to be the first applicable redressal mechanism to homebuyers. The arguments put forth by the worried real estate industry contend that insolvency applications under the IBC have the consequences of stalling their entire projects at the instance of a singular homebuyer. Growing voices are demanding there to be a regulated escalation mechanism with RERA having exclusive jurisdiction over the NCLT in the first instance.

As per prevailing laws, Homebuyers have three separate forums under which they can seek remedies against Builders/ Promoters i.e. NCLT, Consumer Forums and RERA. Jurisdictional Exclusivity i.e RERA being the Court of first instance has been previously challenged before the NCDRC, the Delhi High Court and the Supreme Court of India. The relevant provision under which builders often stake such a claim is Section 79 of the RERA which reads;

“79. No civil court shall have jurisdiction to entertain any suit or proceeding in respect of any matter which the Authority or the adjudicating officer or the Appellate Tribunal is empowered by or under this Act to determine and no injunction shall be granted by any court or other authority in respect of any action taken or to be taken in pursuance of any power conferred by or under this Act”

The real estate industry is pushing for buyers to first approach the RERA and have put forth the following suggestions:

Responding to such demands Mr. Niranjan Hiranandani, President of the National Real Estate Development Council has stated “Having duality of jurisdiction is not solving the problem. We are not scared of the duality we are scared that duality is not solving the problem. We are interested to see the project getting completed. Either you ensure duality doesn’t create a problem or you say no, one law will be superior to other”

The Hon’ble Supreme Court has held that the remedies under RERA and the IBC are concurrent in nature;

“The RERA is to be read harmoniously with the Code, as amended by the Amendment Act. It is only in the event of conflict that the Code will prevail over the RERA. Remedies that are given to allottees of flats/apartments are therefore concurrent remedies, such allottees of flats/apartments being in a position to avail of remedies under the Consumer Protection Act, 1986, RERA as well as the triggering of the Code.”

Similarly, the NCDRC and the Delhi High Court has also upheld that remedies provided under Consumer Protection Act and RERA are concurrent, and the jurisdiction of the Forums/ Commissions constituted under the Consumer Protection Act is not ousted by RERA. The Hon’ble Delhi High Court further observed that that the remedies under RERA were not intended to be exclusive, but to run parallel with other remedies.

A note of caution for Homebuyers directly approaching the NCLT is to be considered that it is not a forum for recovery and that unlike RERA, Insolvency proceedings do not exclusively protect the interest of homebuyers but also other stakeholders like banks and lending institutions.  Thus, homebuyers must seek seasoned professionals who can counsel the best suited forum for their individual case.

Disclaimer – the above article is based on interpretation of the related judicial pronouncement and related laws which may differ from person to person. The readers are expected to take expert opinion before placing reliance on it. For more information, please reach us at support@centrik.in or call us at 8383011629