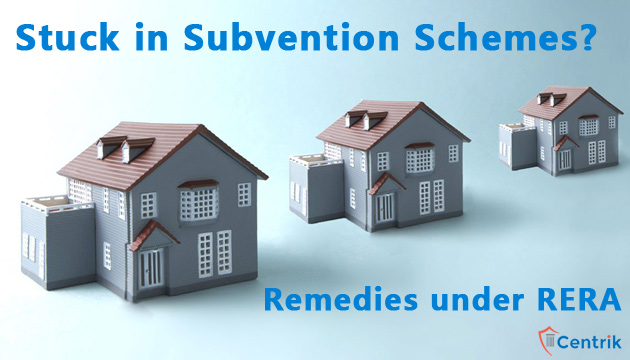 The realty developers or the builders every other day are coming up with new schemes so as to attract the home buyers. These schemes are being portrayed in such terms that one cannot move without availing benefits of the same, which adds to the unscrupulous benefits of the developer. One of such schemes is the Subvention Scheme, which supports the home buyer financially to invest in a property. But are these schemes even benefitting the home buyers or causing great losses to them? Let’s have an overview of the same.

What is a Subvention Scheme?

Under the Subvention scheme, a home buyer has to initially pay only 10-20% of the price of the property. Thereafter a three-way contract or a tripartite agreement is entered into between the home buyer, the developer and the bank from which loan is availed. While the construction is under progress, the developer pays the interest on the loan availed. As the construction of the project progresses the loan amount is transferred to the account of the developer. The Easy Monthly Installments [EMI’s] of the buyer begins only after he gets the possession of the property purchased. In some of the agreements in case the home buyer however wish to withdraw from the project they may do say by rendering a notice on the developer, who as per the agreement buy back the property from the buyer by paying back the initial amount paid along with any interest or penalty, if any, to the bank.

Problems which home-buyers are facing under the subvention scheme

In the present scenario many developers are flouting the terms and conditions of the tripartite agreement, by not paying the interest after a specified period of time since the construction of the project has been abandoned. Further when the home buyers serve notice to withdraw from the project their requests are being unheard, which leaves the home buyer in a pitiable position as the buyer neither has the funds to pay the amount of interest or let go of the initial payment made and on the top of the same the bank is persistent upon the recovery of the interest. Moreover, builders also do not keep the promise of buying back the property in case of the default.

In furtherance to the above discussion, now the question arises where a person should go when the project under the subvention scheme is stalled and home-buyers are obligated to pay the EMI’s because funds were transferred to the builder or developer on their financials.

Real Estate (Regulation and Development) Act, 2016 implemented in May 2017 and since then people who are aggrieved and have issues related to the Real Estate matter can take up their grievances before the Real Estate Regulatory Authority of the State;

And in the cases of subvention scheme RERA Authority has the power to decide and dispose of the matters if any of the aforesaid mischiefs happens. As per the provisions of the RERA Act, if builder is not giving possession on time then a complaint can be filed before RERA Authority to redress the grievance. In other instances, where builder is not paying EMI, s under the subvention scheme, Builder is not buying back the property as promised in the terms and conditions of the subvention scheme agreement or cancellation of the allotment, a home-buyer has a legal right to file a complaint to get the legal recourse.

At last, we can infer that in case of subvention scheme if any of the buyer is troubled due to the non-performance of the builder then RERA can play a pertinent role to bring the justice.