Remedies for Employees under IBC 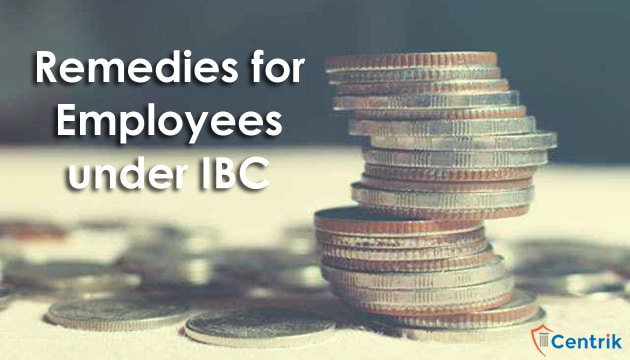 Under Insolvency and Bankruptcy Code, 2016 (IBC), there are two types of creditors who can file an insolvency application before National Company Law tribunal (NCLT) i.e. Financial Creditor and Operational Creditor.

Till now most of the applications entertained by NCLT have been filed by financial creditors which include all the banks, homebuyers, lenders and all the persons who have provided some financial aid to the corporate debtor having a time value of money.

As per section 5(20) and 5(21) of IBC Laws, the claims relating to employment have been classified under “Operational Creditors”.

Who are operational creditors?

What is operational debt?

So as per the plain reading of above definition, It becomes clear that operational debt arises in respect of-

Who is an employee?

An employee is a person, hired by a corporate person or company to work on regular employment basis and is withdrawing fixed salary or wages from the same company. The employment is established if-

Application by an employee

The first petition which was filed by the employee under IBC was in the case of Aruna Hotel vs. Employee wherein the employee was entitled to get an amount of Rs. 2.6 Crs from the corporate debtor which was also established from the letter in which the employer acknowledged that the employer will clear those arrears but failed to do so. The employee demanded the same and also issued the demand notice regarding the same but all in vain. Thus the insolvency petition was admitted successfully against the corporate debtor.

After referring the provisions of the code and decision laid down by the adjudicating authority in favor of employee it is clear that the IBC is a comprehensive law that can redress the grievances of the employee as well. An employee is an operational creditor and has the right to file an insolvency application against the corporate debtor or employer under section 10 of IBC. Also, every employee has to be given equal treatment like other creditors and no preferential treatment shall be allowed.