Time to exercise Suo Motu Powers by MahaRERA– An Analysis 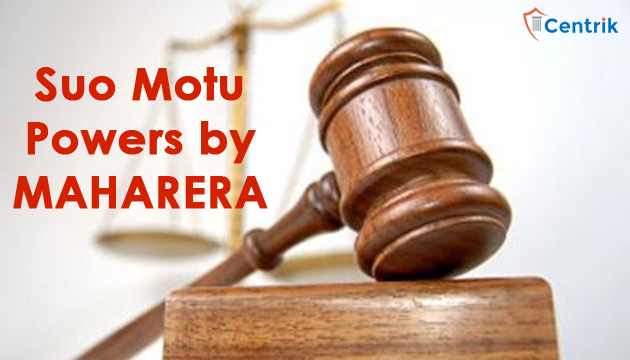 RERA implementation was called a new era of transparency and accountability but not much has changed for homebuyers over the years. The homebuyers still continue to suffer from non-delivery of their home, getting possession on time and seeking penalties for delays. There here have been cases where RERA orders have not been followed by builders and authorities and penalties were imposed for delays.

RERA regulators need to have a mechanism for timely redressal of issues so the lost confidence of homebuyers is restored. There is surely an implementation gap in RERA as buyers still face many issues related to the filing of Complaints, indefinite delays, and refund of amounts, compensation, and penalties.

We seek to explain why and how MahaRERA should implement and use this power and speculate about the effects of Suo Motu Powers on the homebuyers.

The main objective of the Act was to protect the interest of homebuyers by ensuring accountability, transparency, fair play and reducing frauds and delays in real estate projects but its objective has not lived up to expectations of the homebuyers.

Now, the time has come to take Suo Motu actions against the defaulting builders and developers as homebuyers and consumers have lost all their hopes while pursuing never-ending cases which once decided are followed by cumbersome execution process.

When can Suo MotU action be taken against Developers

Suo Motu Action can be taken by MahaRERA u/s 35 of the RERA Act. The authority can Suo Motu by an order in writing called a promoter or allottee or real estate agent at any time to furnish in writing such information or explanation relating to the concerned affairs as the authority considers fit.

In accordance with Section 7 of the act, MahaRERA can take Suo Motu cognizance when it is satisfied that :

Therefore, as per Section 35 of the Act, MahaRERA can initiate inquiry and investigation against defaulting developers. In addition to that, MahaRERA enjoys the same powers as of a Civil Court under the Code of Civil Procedure, 1908 and the authority just as civil court is empowered to order the discovery and production of books of account, Summon and enforce the attendance of persons and Examine them on oath, issuing commissions for examination of witnesses or documents.

When Suo motu action is taken by MahaRERA, and the registration of the developer is revoked then the only option left is to protect the interest of homebuyers and let them form an association of allottees as per Section 7 and 8 of the Act.

Pursuant to the formation of the Association of Allottees, a resolution panel is appointed by MahaRERA and this panel assists the Association to complete the remaining project. Association of allottee shall have the first right of refusal on the manner in which the project is to be completed.

The instance of Suo Motu action by MahaRERA

Like before, MahaRERA has again passed various orders against errant developers while using its Suo Motu powers. MahaRERA found that most of the developers have failed to renew their RERA registrations and the project was incomplete. Moreover, they have also failed to submit an annual audit report. Pursuant to the hearing, MahaRERA directed developers to hand over a list of allottees along with their contact details, to all the allottees of the said project, along with a copy of the order, and to enable the allottees to form an association of allottees. Thereafter, the association of allottees may proceed under Section 7/8 of the Act as per the MahaRERA order.

Now the responsibility of using Suo Motu powers and effective implementation of the Act typically resides with MahaRERA. It is now the duty of MahaRERA to go into the details and check the veracity and authenticity of the Projects, Developers & Real estate Agents. Over the years, Promoters and Builders have taken full advantage of diluted rules and working of MahaRERA. Maharashtra RERA Authority needs to take stringent steps in order to restore the faith and confidence of homebuyers. Justice delayed is justice denied.

Disclaimer – the above article is based on the personal interpretation of related laws, which may differ from person to person. The readers are expected to take expert opinion before relying on this article. For more clarification, the readers can be expected at shriya@centrik.in or support@centrik.in