Withdrawal of money by directors during the CIRP, to attract criminal offence: NCLAT 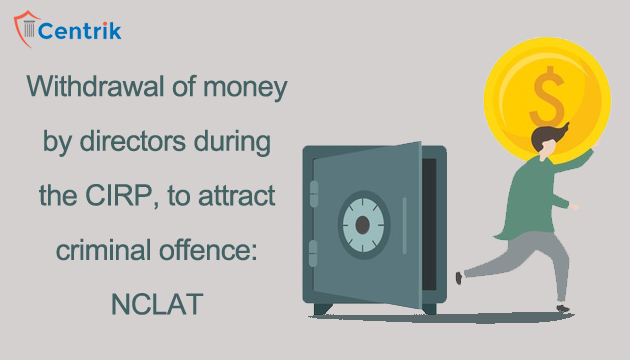 The major cause of enforcing the Insolvency & Bankruptcy Code, 2016 was to pinpoint the companies which despite being under financial distress were somehow managing to keep themselves tact in the market. In other words, the aim was to re-establish/re-organize an insolvent company by bringing in resolution plans through the medium of highly qualified resolution professionals. This particular positive restructures and change in a company will further have an impact on the economic growth of the company.

However, the reality for the directors of such insolvent companies is hard to swallow, owing to which they sometimes even act beyond the law. In order to curb the unlawful activities and disregard of the order of the Adjudicating Authority, the Hon’ble National Company Law Appellate Tribunal has directed that in case a director of the company withdraws money from the accounts of the company during the Corporate Insolvency Resolution Process (CIRP), the same will attract criminal proceedings against the Directors for the offences of criminal misappropriation and criminal breach of trust.

A petition under Section 9 of the Insolvency and Bankruptcy Code, 2016 was filed against M/s. Shree Vishnu Power & Energy Pvt. Ltd. [Corporate Debtor], for the default of the debt owed to M/s. ISGEC Heavy Engineering Ltd. before the Hon’ble National Company Law Tribunal, Cuttack Bench. The same was admitted vide order dated 27.09.2019, CIRP was initiated against the Corporate Debtor and the moratorium period under Section 14 of the Code was declared by the Adjudicating Authority.

Soon after the IRP took over the Company, the appeal being Company Appeal (AT) Insolvency No.1113 of 2019 was filed by the Corporate Debtor.

However, interim orders with regards to the non-withdrawal of money by the Directors were given by the Hon’ble NCLAT. But the greed of the directors of the company was such that within two days from the interim order, the Directors withdrew huge amounts including the cash withdrawals without prior intimation or knowledge of the IRP. Such act of the directors of the Corporate Debtor was in clear violation of Section 14, 17 and 19 of the Code as the directors have illegally withdrawn money from the company during the moratorium period. After the same was brought before the Hon’ble NCLAT, the directors even assured through statement and also vide undertakings via affidavit to refund back the money, but the same never happened.

The Hon’ble NCLAT after taking into consideration the entire gamut of facts and circumstances held that the directors have acted illegally by withdrawing money from the company and even issued self cheques after the moratorium period was declared. Such act of the directors is not justified in any manner whatsoever. Even after giving undertaking and statements before the Hon’ble NCLAT the directors failed to refund the money withdrawn and also further disregarded the orders of the Adjudicating Authority, which contemplates as the contempt of the court; against which the NCLAT has powers to take action Section 425 of the Companies Act read with enabling provisions.

The Hon’ble NCLAT further held that the appeal filed by the directors should be dismissed in default for the in actions of the Directors and further directed the IRP to move before Adjudicating Authority or any other authorities including police authorities to pursue the matter with regard to money illegally withdrawn from the accounts of the Corporate Debtor to trace the money and get it back in the Company accounts. It was held that the present case prima facie appears to be of offence to be treated as criminal misappropriation and criminal breach of trust. The evidence of a violation of Section 14, 17 and 19 of the Code was evident and thus the matter was referred back to the Adjudicating Authority to consider and take actions under Section 70 and 74 of the Code.

Disclaimer – The above article is based on the personal interpretation of related laws and judicial pronouncement. The readers are expected to take expert advice. For any clarification, the author may be reached at ibc@centrik.in