Who all are Operational Creditors 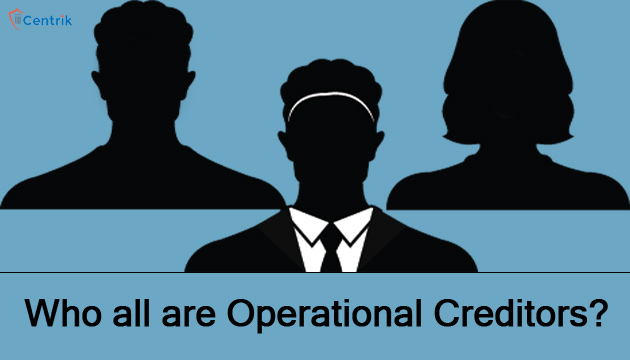 What is operational debt?

As stated in section 5(21) “operational debt” means a claim in respect of the provisions of goods or services including employment or a debt in respect of the repayment of the dues arising under any law for the time being in force and payable to the Central Government, any State Government or any local authority.

The intention of the code is to confine operational debt only to four categories i.e.

The above mentioned list is inclusive but not exhaustive.

In other words, operational creditors are those creditors where liabilities arise from transactions on operations.

The National Company Law Tribunal (NCLT) in its first case, Col Vinod Awasthy vs AMR Infrastructure Limited whereby the Hon’ble Tribunal interpreted the definition of Operational creditor under the IBC operational debt would be confined to only goods, services, employment and government dues and debt owed to the petitioner (a flat purchaser in this case) had not arisen from any of the above four categories, the petitioner in the instant case had neither supplied goods nor had rendered any service therefore cannot acquire the status of an operational creditor Conclusively the Conclusively the operational debt arises out of some business or contractual or statutory transaction;

Pre-requisites for an Operational Creditor to initiate Insolvency?

In the case of Era Infra Engineering Ltd v Prideco Commercial Projects Pvt Ltd, the operational creditor has failed to issue the demand notice under section 8 to the corporate debtor stating that notice issued by him earlier under section 271 of the old regime for winding up would constitute demand notice only, hence he is eligible to file the petition under section 8 of the IBC. After considering the various contentions/submissions of the operational creditor, the National Company Law Appellate Tribunal (NCLAT) held that as per provisions of section 8 read with Rule 5 of the Insolvency and Bankruptcy (Application to Adjudicating Authority) Rules, 2016 (Adjudication Rules), operational creditor can file the petition for initiation of corporate insolvency resolution process only after the expiry of 10 days from date of issuance of demand notice in the prescribed format under IBC. Hence, adjudicating authority held that section 8 read with rule 5 of the adjudication rules are mandatory.