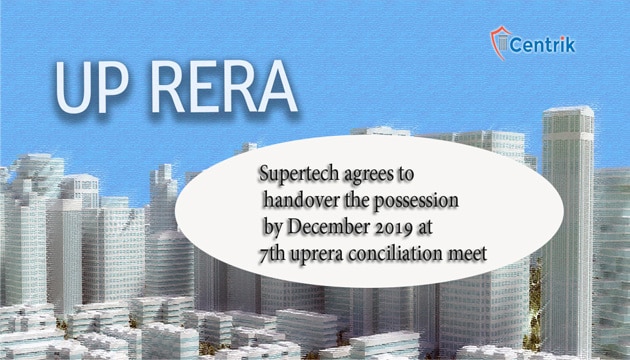 That the Uttar Pradesh RERA Authority keeping up with the spirit of the Real Estate Regulation and Development Act in mind became the first RERA Authority in the country to formulate and implement the Mediation and Conciliation cell for amicable settlement of disputes between buyers and developers.

That 7th Conciliation Forum of NCR was held by the Uttar Pradesh Real Estate Regulatory Authority recently wherein for the first time a settlement was achieved between the developer company Supertech and 14 Homebuyers.

Supertech during this conciliation meet agreed to give possession to 14 homebuyers by December this year, who previously booked flats in various real estate projects by the company. Supertech also agreed to bear the EMI’s and House rent costs of the homebuyers until that time, apart from giving the option to relocate the homebuyers in any of their projects for the time being.

According to the UP-RERA officials, an agreement was reached between the homebuyer and Supertech in all the 14 cases, which were taken up for hearing during the 7th Conciliation Forum of NCR, held by the Uttar Pradesh Real Estate Regulatory Authority.

“Both the buyers and builder side were brought to the table and their problems discussed. All the cases taken up were related to Supertech and amicably settled,”

This comes as a great precedent, set by Supertech Limited for all the real estate developers in India.

Such settlements reached between the homebuyers and builders shows exactly how much competency is achieved by UP-RERA in resolving the real estate related issues.

On previous occasions too, UP-RERA has ensured relief to the homebuyers and kept the purpose of the RERA Act alive by striking a balance of interests between the builder and the buyer whilst also resolving issues between them. The state RERAs should focus more on how a settlement could be reached between builders and Homebuyers rather than treating them as a civil case.

There is a need of more and more settlements like this to resolve the ever-growing issues related to real estate in India.