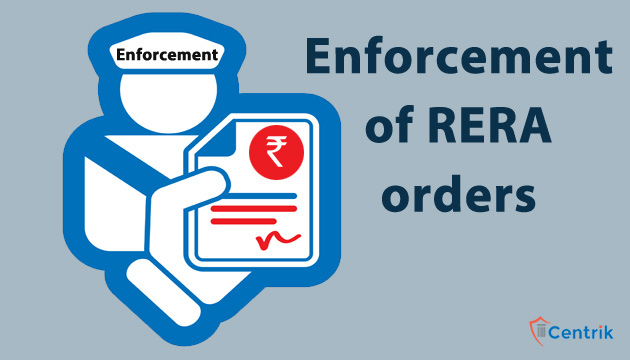 Recently, we are received a lot of queries regarding the matter that orders passed by State RERA Authority are not being complied with by the party/builders or if we say it precisely, the builder is not paying the amount ordered by authority. Let’s analyze it legally.

The above issue may be described with following synonyms:

In this article, I’ll be trying to address some of such grievances and try to educate about the above-mentioned issues.

As we all are aware that Real Estate (Regulation and Development) Act, 2016 (hereinafter referred as Act) came into force from 01/05/2017, for among other, addressing the grievances of the aggrieved home buyer, and it is working effectively in almost every State and the authorities have passed number of orders, however, enforcement/execution of order are a prime concern.

Issue 1: What to do if the builder is not complying with the order of RERA Authority?

Solution: there may be 2 option

If the authority has passed an order in your favour granting you the desired relief, and the builder is not complying with the same then you have to file an application for enforcement of order u/s 40 of the Act, which deals with Recovery of interest or penalty or compensation and enforcement of orders, etc.

“Recovery of interest or penalty or compensation and enforcement of orders, etc.

Sec 40 (1) If a promoter or an allottee or a real estate agent, as the case may be, fails to pay any interest or penalty or compensation imposed on him, by the adjudicating officer or the Regulatory Authority or the Appellate Authority, as the case may be, under this Act or the rules and regulations made thereunder, it shall be recoverable from such promoter or allottee or real estate agent, in such manner as may be prescribed as an arrears of land revenue.

Sec 40 (2) If any adjudicating officer or the Regulatory Authority or the Appellate Tribunal, as the case may be, issues any order or directs any person to do any act, or refrain from doing any act, which it is empowered to do under this Act or the rules or regulations made thereunder, then in case of failure by any person to comply with such order or direction, the same shall be enforced, in such manner as may be prescribed.”

Issue 2: WHETHER ORDER CAN BE EXECUTED THROUGH nclt UNDER IBC LAWS?

Solution: IBC is one its kind law where action is taken instead of further orders. The IBC laws trigger when any corporate person is not able to pay off its liability.

If we take the order of NCLT. A order by RERA is a decree which need to be paid by the builder, if the builder does not pay it then it would be default as per IBC Laws. Hence, a petition can be filed before NCLT for default in compliance of RERA order.

Any person who has an order directing another party to pay the prescribed amount, but the other party is not complying with the same.

Issue 3: Who can file an application for enforcement of order?

Solution: Any person who has an order directing another party to pay the prescribed amount, but the other party is not complying with the same.

Problem 4: Where to file an application for enforcement of order before RERA?

Solution:   As per the mere reading and under of the Act and Rules it is very much evident that the passing authority is having the power to enforce the same. Let me quote the verbatim of Rule 24 of UPRERA Rules for a better understanding.

Here if we read the rule the basic understanding says that, the power of enforcing of order vests with the authority who has passed an order. This rule is different in every state but the base is same as above that the passing authority is having the enforcement power.

Conclusion– For enforcement or execution of RERA authority, you have to approach to the RERA for issuance of RC or can file petition with NCLT u/s 7 of IBC laws . You are advised to make complete fact and legal analysis. For any clarification, please read to the author at rera@centrik.in or speak to our expert at 8383011629

Disclaimer – The above points are based on the personal interpretation of related laws.  The readers are expected to take expert opinion before placing reliance on it. For more information, please revert us back.