RERA is for Promoting Real Estate Sector and not for Strangling: Venkaiah 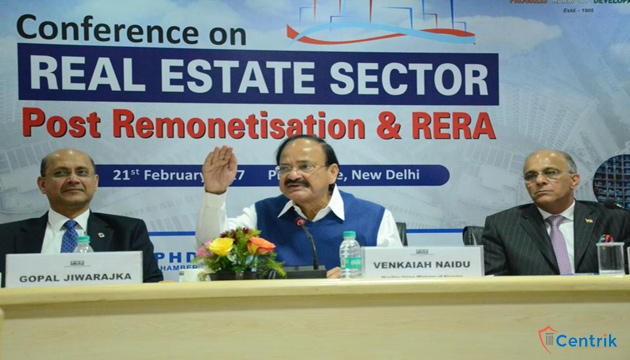 In last few years the Indian Real Estate sector has been tarnished by excessive project delays and poor quality of construction and there was no proper regulator to control these activities. Last year, the government had declared the much-awaited watchdog for the real estate sector i.e. Real Estate (Regulation and Development) Act, 2016 and now the picture of this sector is completely upside down.

Few days back, Vice-President M. Venkaiah Naidu, while talking at the inauguration of the 28th convention of the Builders’ Association of India defended the position of the Real Estate Regulatory Authority (RERA) by saying that the Real estate regulation is not for strangulation, but for regulation and promotion of the sector. Some operators had been misusing the customer’s trust in them. That is the reason why he, when he was Union Minister, after seeking others consultation, introduced the Real Estate Regulatory Authority.

Acknowledging the sector as an imperative partner in India’s development story, he stated that the, the real estate and construction sector is the second major employer in the nation and is slated to increase at 13%. It is anticipated to draw $10 billion investment by 2020. The construction business has gotten a foreign direct investment of $24.54 billion amid April 2000 and June 2017 and the market share of real estate sector is predicted to touch $180 billion by 2020.”

He guaranteed builders that the issues they were confronting would be investigated. Mr. Naidu stated that he had held numerous meetings with different ministries and urged them on the requirement for a single-window leeway for undertakings to guarantee ease of doing business. He also mentioned that Mumbai and Delhi has effectively decreased the time taken for endorsement to 60 days, and there is a hope that other States will adopt this model soon. He added that the subsequent step would be to have an online approval system.

On the trouble confronted by contractual labour, the Vice-President stated that the NITI Aayog has undertaken steps to constitute a committee of all shareholders to draw out a unified standard contract document.

Thus, we can say that with the introduction of RERA the realty sector has benefited in numerous ways and as the time will surpass it will only help to grow this industry.