Property on Lease are not covered under RERA Act 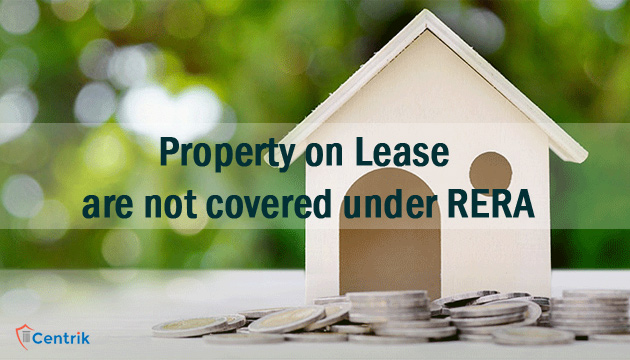 Real Estate (Regulation and Development) Act, 2016 has hit the ground few months back and this was the ointment which all the aggrieved home buyers were waiting for to get a sigh of relief. Lately, Maha RERA has given ruling on one very important aspect which is about the applicability of RERA Act on properties which are on lease/rent.

MAHARERA: Dismissing a complaint by a home ‘buyer’ who purchased a 1BHK apartment in Lavasa Corporation’s Brookview project at Lavasa City in Dasave in Pune, because The Maharashtra Real Estate Regulatory Authority (MahaRERA) has ordered that the provisions of the Real Estate (Regulation and Development) Act (RERA) are not applicable to lease transactions.

Jitendra Tulsiani (Buyer) had filed the complaint under Section 18 of Real Estate (Regulation and Development) Act (RERA), who purchased a flat in Brookview project at the price of Rs 43.77 lakh, on April 4, 2014, with the promise of possession on or before October 2016, but due to an order by the Ministry of Environment and Forests in November 2011, developer had failed to give possession because work was stopped due to that order in November 2011.

According to Member, MahaRERA, Bhalchandra Kapadnis said that the agreement signed between Tulsiani and the developer was an “agreement to lease of apartment”, and according to clause 5.1 of the builder buyer agreement clearly showed that the complainant had agreed to take the apartment on lease after agreeing to pay Rs 43.77 lakh, and rent of Rs 1 per year for the lease period of 999 years. “And according to Clause 25 of the agreement shows that the respondents (Lavasa) are the sole and absolute owner of the plot on which the building will be constructed. And renewal of lease mentioned in Clause No 26 regarding renewal of lease. On inspection of these clauses, now there is no doubt that it is a lease agreement.”

Kapadnis said that according to Section 2 (d) of RERA, which defines an allottee, and does not include a person to whom such an apartment is given on rent. He found that it cannot be applicable to lease transactions, after going through various provisions in RERA.

“MahaRERA does not have any jurisdiction to adjudicate upon this complaint if the complainant has agreed to take an apartment form respondent on lease,” Kapadnis said.

However, the order of MahaRERA does not consider the fact that the signed agreement states that the lease will come into action after possession of the flat, and for that, a separate lease deed would be signed between the developer and the buyer.