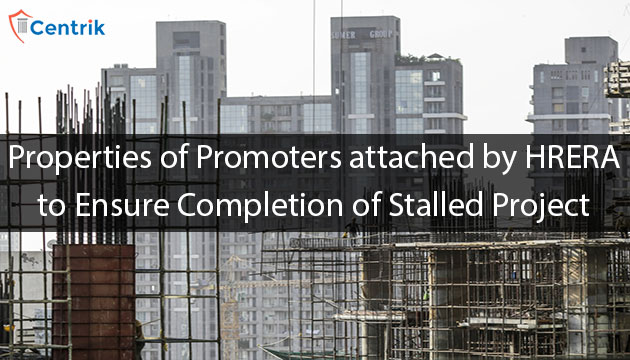 M/s Orris Infrastructure Pvt. Ltd. and M/S Three C Pvt. Ltd. faced the full brunt of the powers entrusted to the HRERA Gurugram under the Real Estate (Regulation and Development) Act, 2016. The HRERA in an exemplary move ordered for the attachment of 10 acres of prime land in Gurugram and 4 plots in Noida belonging to M/s Three C Pvt. Ltd. and warranted its sale to raise Rs. 334 Crore to complete the Greenopolis Project.

In July 2018 the HRERA in a rare and first of its kind move had taken an active initiative to expedite the construction and completion of the realty project. In an unprecedented order it restrained the Project Developers from alienating or creating any third party rights through encumbrance, sale, transfer on remaining available 10 acres of prime land until further direction from the Authority.

ATTACHMENT OF PROPERTIES BY HRERA FOR EXECUTION

Further in August 2019, given the recent amendments to the IBC Homebuyers had successfully initiated insolvency proceedings as financial creditors against M/s Three C Pvt. Ltd.

The orders and directions of the HRERA in the instant case prove to be in a class by itself; it is indeed unrivaled in any past decision or order under RERA and shows the true potential of the RERA Act to be a strong instrument to actively standardize business transactions in real estate and comprehensively protect home buyer’s interests in case of default.

The Greenopolis Project also highlights the different avenues and laws that have been successfully implemented that give homebuyers a choice of forums to protect their interests as individuals or as a collective, be it through the fast track process of RERA, the Consumer Courts or the ability to hold the company itself liable in case of incomplete projects under the IBC.

Disclaimer – The above article is based on the personal interpretation of related laws and circumstances of the writer which may change from person to person. The readers are expected to take expert advice before relying upon the said article. For any clarifications, you can read to the author at support@centrik.in.