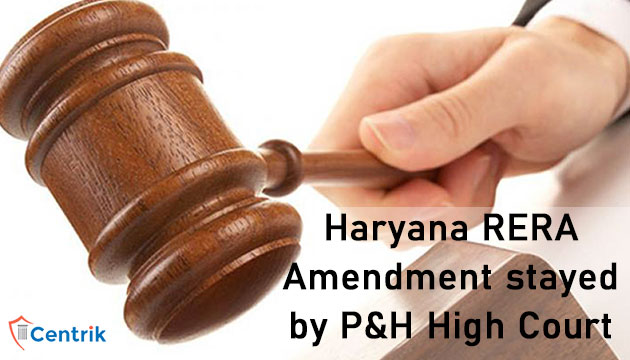 The Real Estate (Regulation & Development) Act was enacted on 5th May, 2016 with a view to establish a transparent real estate market along with protecting the interest of aggrieved homebuyers. The state of Haryana in conformation with the act framed its Real Estate (Regulation & Development) Rules in the year 2017. According to the central act along with rules, RERA Authority was to decide on question of refund or possession along with interest in a real estate dispute as per section 18 of RERA Act. Whereas amount of compensation was to be decide by the Adjudicating Officer as per Section-71 and 72 of the Act.

However, Haryana RERA is still straggling to decide whether RERA authority has the power to provide refund as per RERA Act.

The compensation matters were taken by Adjudicating officer who is a judicial officer appointed under section 71 of the Act. This compensation is something which is over and above the interest provided u/s 18 of the act.

The Real Estate Appellate Tribunal via its order dated 02-05-2019 in the case of Sameer Mahaver vs. MG Housing held that RERA authority does not have power to grant refund and all the matters related to refund would be directed Adjudicating Officer.

After the said order by Haryana RERA Tribunal, all the RERA complaints filed before RERA authority relating to refund with interest to be sent back to the Adjudicating Officer for decision making. This created a wave of chaos as a whole new regime was to be set up and already decided and pending matters of refund were to be taken by the Adjudicating Officer who was not even appointed at both the Authorities.

In order to remove the above anomaly, the State Govt. of Haryana vide notification dated 12/09/2019 brought amendment in the Haryana RERA Rules to empower the RERA authorities to grant order related to matters having refund of money. After the said amendment, again a reverse system to change the complaints started from Adjudicating officer to RERA authorities where CRA forms were filed.

STAY BY P&H HIGH COURT ON THE AMENDMENT  – PHASE 4:

Two months after the above amendment amendment when the authority had just begun to adjust with the current shift, a writ petition was filed before the Hon’ble Punjab and Haryana High Court questioning the validity of the amendment in the Haryana Real Estate Rules of 2017.

In its interim order dated 23/11/2019, Hon’ble P&H High Court has for now stayed the said amendment from operation and the matter is now listed to be taken up in January 2020 for further orders.

Again, a new era of confusion and chaos have prevailed which has against stopped on the RERA dispute resolutions. It is the time to see whether RERA or Adjudicating office wins but definitely aggrieved home-buyer are losing.

Such frequent shifts on the adjudication front between the RERA Authority and the Adjudicating officer is making it difficult to create a stable redressal environment. Where the whole point of RERA was speedy disposal of cases, months have passed but justice to aggrieved buyers is still awaited. All this has resulted into a state of total chaos where once again suffering are the ones for whose benefit the Act was enforced.

Disclaimer- The above article is based on the interpretation of related judicial pronouncement and related laws. The readers are expected to take expert opinion before relying on this article. For more information and clarification, please connect to us at rera@centrik.in or connect at 8383011629