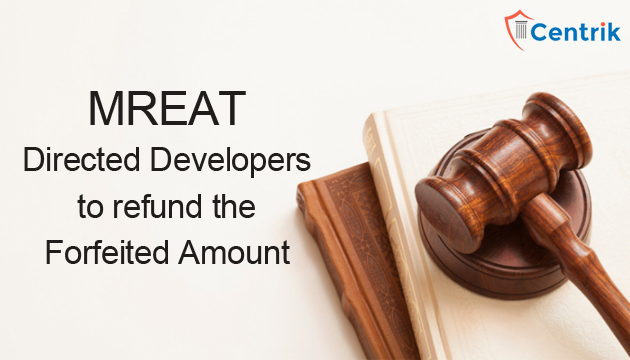 In the matter of Mr. Jagdish D. Patel and Ors. Vs Skystar Buildcon Pvt. Ltd. & Ors. The MREAT set aside the impugned order passed by MahaRERA and directed the developers to refund the forfeited amount of Rs. 8.14 lakhs to Jagdish Patel and Pravin Patel within a period of two months along with the cost of Rs. 5000/-.

Sometime in December 2016, the brothers incurred heavy expenditure as their mother was hospitalized which led them to borrow money from friends and relatives for her treatment. Meanwhile, they realized that they would not be able to pay the balance consideration towards the flat so they decided to cancel the booking with the developers. In view of cancellation, the developer retained Rs. 8.14 lakhs and refunded Rs. 35 lakhs in December 2017, without citing any sufficient reasons for the forfeiture. The brothers sent a legal notice to the developers for recovering the remaining amount but didn’t receive any reply from them.

They went on to file a complaint with MahaRERA for recovery of the forfeited consideration, to which the developer claimed that one of the brothers, Jagdish Patel had signed a declaration-cum-indemnity bond agreeing to the forfeiture of the amount. Their complaint was dismissed as MahaRERA observed that the developer had not violated any provisions of the RERA Act, 2016 and that the forfeiture of the amount was in accordance with the terms and conditions of the booking letter.

Aggrieved of the MahaRERA order the brothers filed an appeal challenging it. The advocates for the developer argued that the declaration-cum-indemnity bond was signed by one of the brothers Jagdish Patel on 29th December 2017, which put an end to the dispute between the parties and that they could not claim any balance refund based on the Client’s information form.

The tribunal held that the Client’s information form that was signed by the brothers on 31st March 2015, was silent on terms as to forfeiture of any amounts if the transaction got canceled. The Tribunal further noted that the declaration-cum-indemnity bond was signed after two years of execution of the Client’s information form on 29th December 2017, while the developer had issued a refund cheque of Rs. 35 lakhs on 2nd November 2017. The Tribunal held that such a subsequent execution of a declaration-cum-indemnity bond creates doubt about genuineness and truthfulness of the contents thereof as compared to the genuineness and truthfulness of the contents of Client’s information form. Hence, the case made out by the developers in respect of his agreed right as per declaration-cum-indemnity to forfeit the balance amount was not acceptable and probable and the reliefs prayed by the brothers for recovery of the forfeited amount was justified.

The MREAT set aside the impugned order passed by MahaRERA and directed the developers to refund the forfeited amount of Rs. 8.14 lakhs to Jagdish Patel and Pravin Patel within two months along with the cost of Rs. 5000/-.