Moratorium period u/s 14 of IBC, is not applicable on the criminal proceedings under prevention of money laundering Act

CentrikBlogsLegal AdvisoryDebt Recovery ManagementMoratorium period u/s 14 of Insolvency and Bankruptcy Code, is not applicable on the criminal proceedings under prevention of money laundering Act 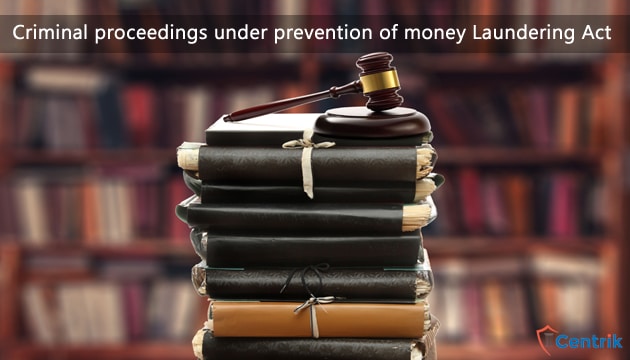 Insolvency and Bankruptcy Code, 2016 is the legislation which has been enacted with one of its motives to safeguard the interests of creditors (financial or operational). These interests of creditors can only be safeguarded by redressing their grievances in an uninterrupted time-bound manner so that  resolution can happen in a reasonable time frame of 180/270 days without any obstacles. That’s why Moratorium Period under section 14 of the code comes into the picture once the petition is admitted.

What is a Moratorium Period

When a petition filed u/s 7, 9 or 10 of Insolvency and Bankruptcy Code, 2016 is admitted by the Hon’ble NCLT, the moratorium period starts from the date of admission. In the said moratorium period, no legal proceedings can take place before any civil court or any other tribunal.

In the matter of Prasad Gempex vs. Star Agro Marine Sports Private Limited, the Hon’ble National Company Law Appellate Tribunal held that NCLT cannot decide upon the matters falling under the criminal jurisdiction. Consequently, the NCLT cannot put stay on the criminal proceedings to be held against the ex-directors or promoters of the corporate debtor.

Affixation of property under the Prevention of Money Laundering Act

Prevention of money laundering act (‘PMLA”) relates to the proceeds of crime wherein if the offender has derived a property through money laundering that particular property can be confiscated by the appropriate authorities under PMLA.

Moratorium Period under section 14 of the code shall not apply upon such proceedings under the prevention of money laundering act. National Company Law Appellate Tribunal applied the same stance in the matter of Varrsana Ispat Limited vs. Deputy Directorate Enforcement.

The Resolution Professional then approached Appellate Authority against the decision of NCLT basis of following grounds:-

National Company Law Appellate Tribunal applied the law laid down in the matter of Prasad Gempex vs. Star Agro and held that section 14 shall not be applicable upon the criminal proceedings and therefore, Insolvency and Bankruptcy Code, 2016 cannot override the proceeding under Prevention of Money Laundering Act. Properties attached by the Directorate of Enforcement cannot be released and included in the CIRP.