MahaRERA: What if Cancellation of Booking was done before the implementation of RERA?

CentrikBlogsBusiness AdvisoryRERA ConsultingMahaRERA: What if Cancellation of Booking was done before the implementation of RERA? 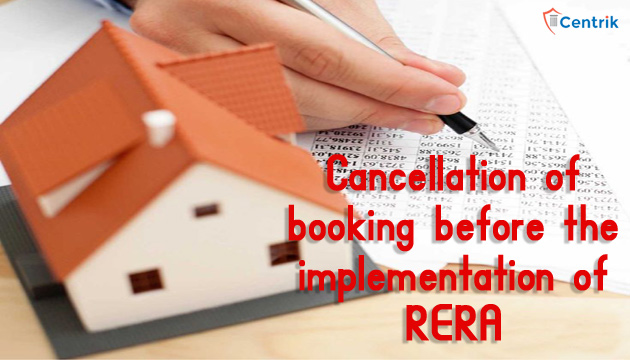 After the implementation of Real Estate (Regulation and Development) Act, 2016, the numbers of complaints have been coming across before the RERA Authority to seek the remedy for their grievances. The Act came in to force with a sole objective to provide the remedy to the innocent buyers and take the actions against the fraudulent builders. Having said that, before proceeding with the RERA complaints, the implications of the provisions of the RERA Act should be known to oneself so that wastage of time and money can be eliminated.

Hence, in the above context, it was argued before MAHARERA, wherein the complainant booked a flat on 25th August 2014. The project was extremely delayed so the complainant cancelled the booking in March 2016 due to some urgent want of the funds and claimed the refund of their amount with interest from the Respondent. However, Respondent had failed to refund the amount thereafter the Complainants filed a complaint before the MAHARERA.

Lately, there were many cases wherein the allottee cancelled the booking and asked for the refund along with interest and the same has been granted by the RERA Authority but in this case, the cancellation was done before the implementation of RERA Act, so the question arises whether it falls under the purview of RERA.

In the aforesaid matter, MAHARERA decided that complaint is not maintainable as the Complainant has cancelled the booking in March 2016 i.e. before the Real Estate (Regulation and Development) Act, 2016 came into force. Hence, no cause of action has been arisen to file this complaint.
Thus, it can be concluded from the discussed case that if the Complainant has withdrawn from the project or cancelled the booking of the flat in order to get the refund before the enforcement of the Real Estate (Regulation and Development) Act, 2016, the suit/complain will not be maintainable. Therefore, it is advisable to have a professional guidance over the matter before proceeding with the RERA complaint.