Invocation of guarantee during Moratorium 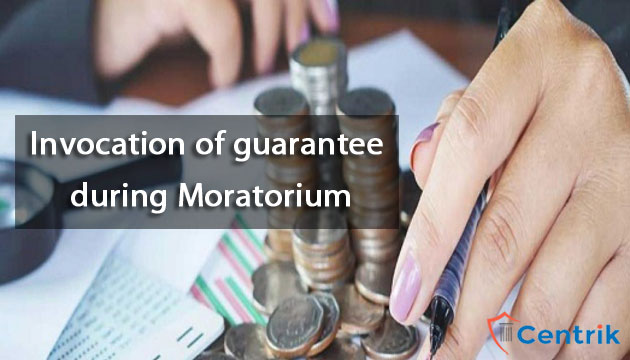 The Government of India came up the with new insolvency laws which came into force from dated 5th August – 19th August 2016 i.e. Insolvency & Bankruptcy Code, 2016, which supersede all the existing laws like the Indian Contract Act 1872, the Recovery of Debts Due to Banks and Financial Institution Act 1993, the Securitizations and Reconstruction of Financial Assets and Enforcement of Security Interest Act (SARFESI), 2002 and the Sick Industrial Companies (Special Provisions) Act, 1985 (SICA) and thereby taking care of the existing defaulters in a time-constrained manner. The provisions of the Code are applicable to companies, limited liability entities, firms, and individuals (i.e. all entities other than financial service providers).

CAN GUARANTEE BE INVOKED DURING MORATORIUM?

Under section 14 of IBC, the moratorium is granted by the Adjudicating Authority (NCLT), during which creditors’ actions have stayed. The Invocation of Guarantee during Moratorium remains a big question before the Judicial and Quasi-Judicial Authorities.

The Hon’ble NCLT New Delhi bench, in Axis Bank Limited vs Edu Smart Services Limited, upheld that the invocation of corporate guarantee during the moratorium period while rejecting the plea of Axis Bank as it was bad in law, the financial creditor who filed its claim with the resolution professional appointed for the principal debtor as well as the guarantor. While taking reference from NCLAT case of Indian Overseas Bank (IOB) against Amtek Auto’s, IRP Dinnkar T. Venkatsubramaniam, where it was held that once the moratorium is declared, financial institutions have to act “on the instructions of IRP” with respect to the corporate debtor’s account. The NCLAT observed that corporate guarantees could not be invoked as the same would violate the moratorium provided to a company undergoing insolvency resolution and cannot take any action without the approval of resolution professional once Section 14 of the Code comes into play.

Also in an instance where a creditor decides to initiate proceedings against a Guarantor of a Corporate Debtor during the pendency of the CIRP, the creditor may well be able to satisfy its outstanding debts through the assets of the Guarantor. However, this will alter the financial position of the Corporate Debtor after the declaration of the moratorium. This may effectively derail the CIRP and any resolution plan that the Committee of Creditors (COC) may be formulated, thereby defeating the scope and purpose of the Code.

It is very pertinent to mention here that under Insolvency & Bankruptcy Code, 2016the preamble relates to the revival and resolution of Corporate persons in a time-bound manner while aiming for optimization of value of assets keeping in view the interest of stakeholders.

As per section 14 of the IBC 2016 and in the above judgments it has been determined that during the moratorium period the invocation of guarantee against the ‘Company under Insolvency Proceedings/ CIRP’ is not only contrary to the provision of the IBC 2016 but is also directed against the interest of the company and its stakeholders.

Thereby the guarantee cannot be invoked during the moratorium period as it will be against the main aim/provisions of the IBC 2016.