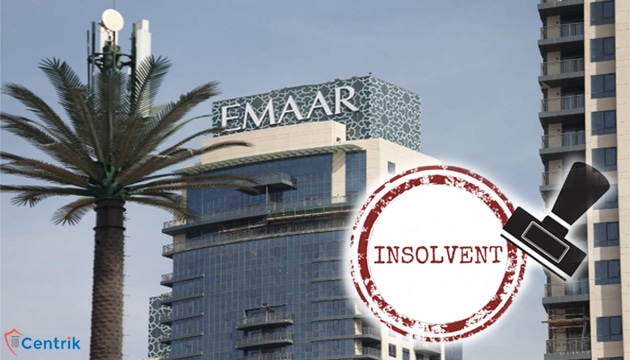 In a recent case, the Hon’ble National Company Law Tribunal (NCLT) has admitted the Insolvency Petition against the EMAAR MGF Land Ltd. filed by one of the homebuyers i.e. Mr. Neeraj Gupta.

Brief Facts of the case:-

According to clause 10 of the agreement, the Respondent Company had to hand over the possession of the booked unit to the homebuyer within the period of 36 months from the date of commencement of construction with the grace period of 3 months i.e. by 28.05.2015. But the respondent company failed to deliver the possession of the said unit within the prescribed time limit.

According to the agreement if the respondent company is not able to handover the possession even within the grace period of three months then the homebuyer or allottee is entitled to payment of compensation for delay @7.50/- per square feet per month.

The respondent company promised to amicably settle the dispute amicably and proposed to deliver the project after the extension of some time period. Whereas Hon’ble NCLT rejected the contention by observing that:-

“There is an extraordinary delay of about five years in delivering the possession. A host of factors like the bargaining power of the parties, the choice available to the financial creditor-allottee and his knowledge about the contract would be a relevant consideration in relation to constructing the contract as a whole.”

By stating the above observations, NCLT rejected the settlement offer made by the respondent company and held that the amount becomes payable on the completion of period of 36 months plus grace period of three months and; a maximum period of further one year could be granted enabling the delivery of possession the said unit by July 2015. Thus, the principal amount along with compensation and interest becomes payable from the date of delay in delivering the possession of the unit.

The Hon’ble NCLT relied on the observation of Appellate Tribunal (NCLAT) in the case of Rajendra Kumar Saxena vs. Earth Gracia Buildocon Pvt. Ltd. which is reproduced as under:

“By the insolvency and bankruptcy code (amendment) ordinance, 2018 dated 6th June, 2018 as per which any amount raised from an allottee under a real estate project shall be deemed to be an amount having the commercial effect of a borrowing. Thereby, after the amendment of the Act, the allottee of real estate project have been treated as financial creditors’”

The NCLT held that even without any element of ‘assured return’ an allottee in the real estate project has to be regarded as a financial creditor. Thus initiated the corporate insolvency resolution process against the respondent company or corporate debtor.

Moreover, NCLT laid down that the petitioner being financial creditor can invoke corporate insolvency resolution process under section 7 of the code against the respondent corporate debtor in case of default in repayment of financial debt i.e. the principal amount along with the interest in the instant case.

Disclaimer –  Please note that the above view is based on personal interpretation and for general awareness. The readers are required to take opinion from the Top IBC professionals or Insolvency Professionals before relying on the article. For any clarifications, please write to us at ibc@centrik.in.