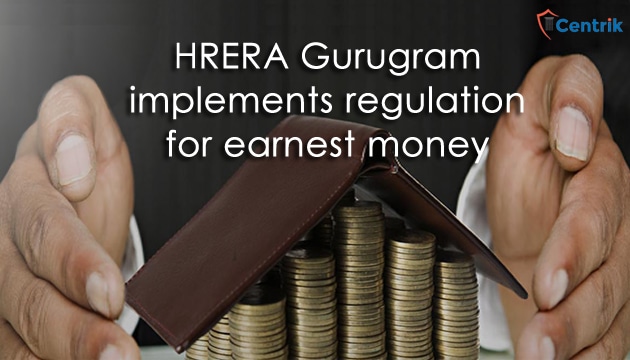 Real Estate Regulation and Development Act, 2016 was implemented by the Indian legislature to its full extent in the year 2017. The act in its ambits cover everything from project registration, complaint to penalties. The Act in order to give powers to the established Real Estate Regulatory authorities has also made provisions with regard to formation of rules and regulations.

Section- 38 of the Act under its ambit states “The Authority shall be guided by the principles of natural justice and subject to the other provisions of this Act and the rules made thereunder, the Authority shall have powers to regulate its own procedure.” Read with Section-85 of the Act the Authority is very well empowered to make regulations. In light of the same only the HRERA-Gurugram has implemented regulations with regard to the forfeiture of Earnest Money.

Earnest Money as per the Act means “the money deposited in good faith from buyer to seller representing the desire of buyer to seal the deal for purchase of flat/unit/plot” . Now, in a lot of cases sometimes the deal does not go through or let say there is cancellation from either side. In such a scenario the question arises as to what will happen to the earnest money deposited. Now either the money is to be refunded completely or there stands some cut owing to the fact that builder may suffer some loss.

The Authority in order to create a balance between both parties has made a standard regulation for earnest money. The regulation states that in no way the builder in entitled to deduct more than 10% of the consideration amount of the real estate which may be a plot, building or flat as the case may be.

Such move by the Authority is a welcome move as it creates a balance between both the parties and is justifies for the aggrieved buyers who had to in worst case of scenario had to give up their full earnest money.