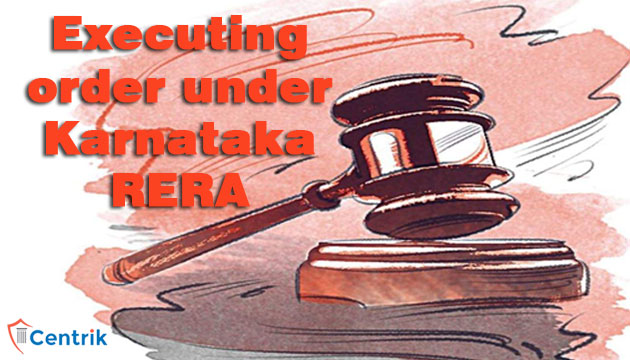 The real estate (Regulation & Development) act, 2016(RERA) has established redressal machinery providing homebuyers with a platform for addressing their concerns related to a real estate project. RERA, unlike the conventional laws, sought to achieve transparency in the sector and also streamlined the processes for grievance and dispute resolution. A homebuyer can now seek remedy against delay in possession or completion under this act. The act enabled homebuyers to seek remedies like compensation for the delay, a refund with interest or possession of their apartments. Once a complaint is heard and decided, the authority issues an order which is to be complied as per the directions of the order.

Till date more than 5000 orders has been passed by Karnataka RERA, however, due to hard powers, the builders are not bothering about the RERA.  Now the problem arises when a builder refuses to comply with the said order which renders a homebuyer helpless, which is happens in most of the cases. Lets analyze it

EXECUTING A RERA ORDER : There are remedies that a homebuyer can exercise in case of non-execution of an order. In cases where a buyer has successfully obtained an order in his favor and is suffering at the hands of the builder to get it executed, he may exercise one of the following remedies:

As the states were required to implement their own rules, The Karnataka RERA rules 2017 provided for implementing the order/direction of adjudicating officer or authority. Rule 25 and 26 read with section 40 stipulates the manner of recovery of interest, penalty and compensation and the same is to be carried out in the manner provided in Karnataka Land Revenue Act 1967 and the rules made there under. The rules also authorize the authority to exercise all the powers while enforcing its order as if it were a decree of a civil court.

Though a homebuyer is free to exercise his rights u/s 40 of RERA, asking for issuance of recovery certificate for executing an order against the builder, people generally prefer going to NCLT u/s 7 IBC against the builder. Preference is given to NCLT as it ensures disposal of cases within a limited period, unlike under RERA which involves a hectic process. As the timely resolution is all a homebuyer is looking for, NCLT is the most favorable option to choose from.

Disclaimer – The above brief is based on the personal interpretation of the verdict and related laws which may differ from person to person. The readers are requested to take expert advice before putting reliance on it. For any clarification, please contact at info@centrik.in or call at 8448487143 or visit www.centrik.in