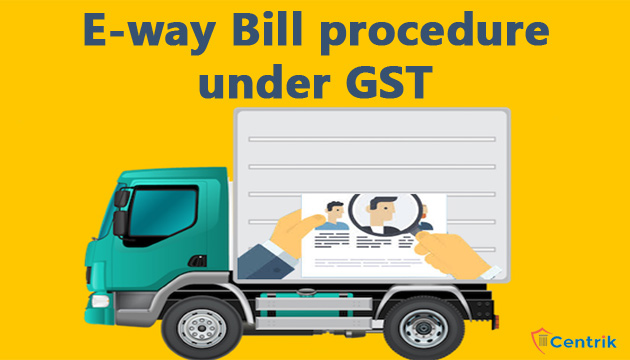 24th GST Council meet held on 16th December 2017 released some points which says States have option to implement e-way bill system in their respective state anytime before 1st June, 2018. After that it will uniformly apply to all states.

What is E-way Bill?

E-way Bill is an electronic way bill giving details and instructions relating to the shipment of a consignment of goods. It will be an effective tool to track movement of goods and check tax evasion.

Who will generate E-way Bill?

Upon generation of the e-way bill on the common portal, a unique e-way bill number will be generated that will be same for supplier, recipient and the transporter.

a) Transport of goods as specified in Annexure to Rule 138 of the CGST Rules, 2017

b) Goods being transported by a non-motorised conveyance;

c) Goods being transported from the port, airport, air cargo complex and land customs station to an inland container depot or a container freight station for clearance by Customs;

d) In respect of movement of goods within such areas as are notified under rule 138(14) (d) of the SGST  Rules, 2017 of the concerned states

Validity of E-way bill depends upon the distance travelled. Up to 100km e-way bill will be valid for one day from the date on which e-way bill has been generated. Each day shall be counted as 24 hours.

For instances, if a conveyance will cover distance of 500 km, e-way bill will be valid for 5 days

Results of Non-adhering to e-way bill

Tax sought to be evade

Implementation of e-way bill will surely reduce the tax evasion but it does not guarantee higher revenue. More digital interface will simplify the transportation system in India that will also improve the logistic industry by reducing travel time and increasing distance travelled.