Developments in RERA since its implementation 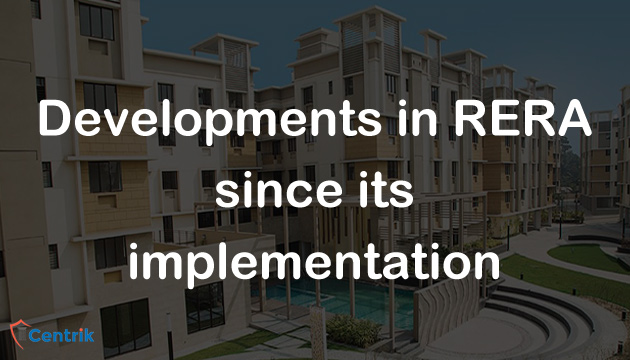 Real Estate (Regulation and Development) Act, 2016 was implemented last year on May 01,2017 and now it is going to complete a year and if we look at the developments since its genesis then we can infer that everything seems to be appropriately in line.

Development since the implementation of the RERA Act.

Some of the aggrieved Home-Buyers are still of the opinion that though the rules have been notified but States have diluted the Central Act and it is favouring the Builder as many states have given the definition of “ongoing project” where they have excluded the project for which lease/transfer deed for 50-60 percent of the apartments has been done or which OC and CC received by the builder.

Despite of the good quantum of the developments, some of the experts still thinks that the implementation of the RERA Act is very sluggish as it is being more than 2 years since it was passed by the both of the houses of the parliament but when we compare the pace of the implementation of RERA Act with the GST then it is evident that Ministry of Finance has won the race from Ministry of Housing and Urban Affairs.

In the light of the above we can conclude and reach to the outcome that after the implementation of the RERA Act a satisfactory development has been done but still it has long way to go for the better and smooth functioning. But now eventually people have some door to knock where they can ask for the remedies for their grievances. RERA is acting as a propeller for the Real Estate industry where no malicious practices of the Builders will be tolerated.