Delay in Project? You can Claim Interest under RERA Act 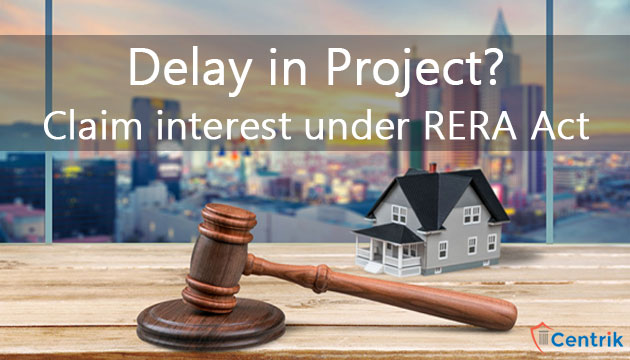 Every one of us dreams of a place that we can call home. We work day and night to pay for buying property or house in the best possible projects and locations. Time and again these dreams and hopes of thousands of homebuyers have been broken by builders and developers all over the country.

So, now the question that arises is what remedy an aggrieved homebuyer has?

The Indian Legislature implemented the Real Estate Regulation and Development Act in the year 2016 which was above and beyond the already exciting Consumer Protection Act. RERA Act brought in an altogether different legal regime and brought specific reliefs concerning homebuyers. One such remedy is that of claiming interest.

REMEDY OF INTEREST UNDER RERA

The most common grievance among almost all the homebuyers is that of delayed possession which simply means the property could not be constructed as per the promised date is given by the builder/developer.

Now, this rate of interest to which every aggrieved homebuyer is entitled to is an absolute right which can be exercised by the homebuyers by approaching the respective RERA Authorities through the means of a formal complaint.

This is something which every aggrieved homebuyer out there should ask for because your money has been misused by the builders for years and now is the time to claim that interest on the paid money. So, don’t keep sleeping on your rights as homebuyers because the newly implemented RERA is here to empower you and before time runs out to go grab your rights because why let these errant developers enjoy your hard-earned money for free.