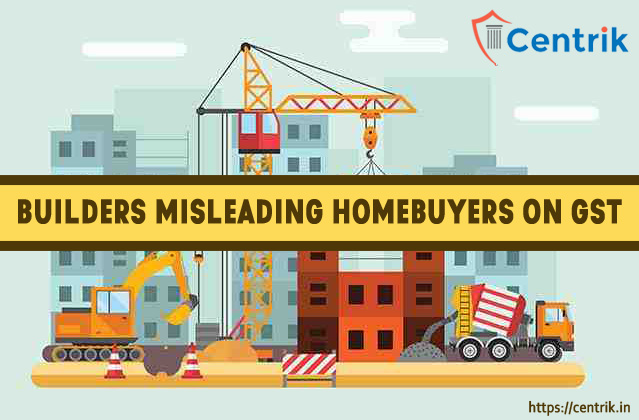 Taking a strong note of builders and construction companies forcing buyers to make full payment before the roll-out of the Goods and Services Tax (GST) on July 1, the Center has warned builders of punitive action for trying to mislead home buyers that they will have to pay more tax under the GST regime.

In a letter to Chief Ministers, the Ministry of Urban Development, Housing, and Urban Poverty Alleviation has asked them to ensure that builders do not charge higher tax from homebuyers on installments to be paid after the GST implementation.

The Ministry has received various representations and complaints from States and Central Board on Excise and Customs (CBEC) that the buyers, who have booked flats and made part payments, are being asked by their builders to make full payment before July 1 to avoid higher tax rate during the GST regime.

In his letter to the CMs, Union Urban Development Minister M Venkaiah Naidu said there had been complaints that buyers are being asked to make entire payment before July 1 to avoid higher tax. “It has been further informed that these activities are against the GST law. The Department of Revenue has clarified that construction of flats, complexes, and buildings will have comparatively a lower incidence of the GST if we compare it to a plethora of Central and State indirect taxes under the existing tax regime,” he said.

Naidu said it is expected that builders would pass on the benefits of the lower tax burden as result of the GST to buyers in the form of reduced prices/installments. “Hence, I would like to request your State Government as well as the builders’ associations to ensure that no builder/construction company should ask customers to pay a higher tax rate on installments to be received after imposition of the GST,” the letter said.

Naidu made it clear that in the current tax regimes, components of Central Excise Duty, VAT, and Entry Tax on construction material are borne by builders which they pass on to customers as part of the price charged for them.

Under normal business circumstances, a transaction get “completed” when the goods/services are delivered, invoices received, and the payments made against them. “The Department of Revenue has further advised that under the GST, the current scenario will change. Full input credit would be available for offsetting the headline rate of 12 per cent proposed under the GST. As a result, the input taxes embedded in the flat will not form a part of the cost of the flat. The input credits should also take care of the headline rate of 12 per cent and it is for this reason that refund of the overflow of input tax credits to the builder has been disallowed,” the Minister said.

The officials say that under the GST, developers would see the lesser burden of tax on input items like cement, steel, etc, as tax credits would be available for set off at various stages. This can lead to lower construction costs for developers across all asset classes, which could likely be passed on to property buyers.

On the other hand, builders say that under the GST, a developer would have to pay 12 per cent VAT on construction materials and 28 per cent on cement. This would be certainly passed on to the buyer. Presently, many developers do not show purchases such as building materials, steel, and others in white money.

The Pioneer has received several emails from buyers in which developers are asking to clear all outstanding dues in one go.

The following is one such email sent by one of a famous builder to their homebuyers.

This is to inform you that from 1st July 2017 the service tax on property will be replaced by GST. So instead of 4.5% service tax, 12% GST will be charged on any payment done against the cost of the property.

We therefore suggest you to kindly clear ALL YOUR OUTSTANDING DUES by 30th June 2017 to save 7.5% on tax.

Please feel free to contact your relationship manager for any clarification/assistance.