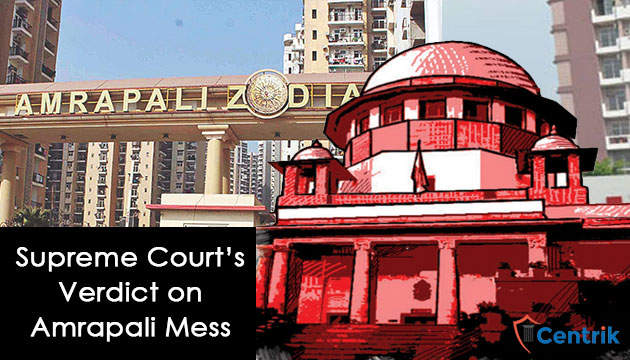 A large scale cheating has been done by Amrapali Company, wherein middle and poor-class home buyers, have been duped and deprived of their hard-earned money and lifetime savings and some of them had taken a loan from the bank and then also they are deprived of possession of their houses. These flats have been under various stages of construction since 2008.

Appalled at the state of affairs in realty sector in Noida and Greater Noida, the SC referred to the affidavits filed by Noida and Greater Noida Authorities in which the two authorities said that more than 70% of the projects – which were initiated way back in the year 2008-09 and were supposed to be completed within 3 years which are still incomplete.

Considering the state of a poor homebuyer, the Supreme Court on July 23 ruled that the Amrapali Group has violated the doctrine of public trust by permitting diversion of funds of homebuyers. However, the court has issued optimistic orders:

Disclaimer – The above brief is based on the personal interpretation of the verdict and related laws which may differ person to person. The readers are requested to take expert advice before putting reliance on it. For any clarification, please contact us at support@centrik.in