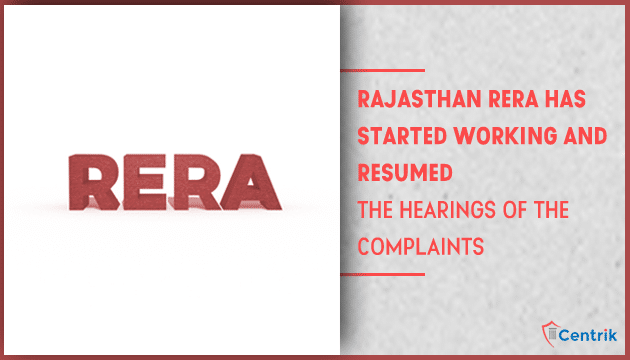 That the Rajasthan RERA has resumed the judicial proceedings, after a stay of six months from the High Court of Rajasthan. The Regulatory authority has now been constituted as per the provisions of the Real Estate Regulation and Development Act, 2016.

Presently the regulatory authority is been headed under the chairmanship of former Chief secretary NC Goel, further former Judge Abhay Chaturvedi, Brajesh Kumar Dangra, Banshidhar Jat and Rakesh Jain have been appointed as members in various capacities for RERA tribunal.

According to the sources, 591 complaints and 128 applications of buyers are pending with the regulatory authority. The authority shall issue notices with respect to pending complaints about hearing.

Previously the Rajasthan RERA was functioning partially i.e. only the administrative body of the authority was working. The complaints were being filed on the official website of Raj RERA hereafter the physical copies of the complaint along with all the pieces of evidence were to be filed with authority. Accordingly, the authority had been issuing notices to the builder/ respondent to file their reply. Now since the hearings have been resumed the authority will be notifying the hearing dates to the parties to the complaint soon via emails and post.

Now since the regulatory authority has resumed working Chairman has stated that soon the complaints and problems of homebuyers and builders will be resolved. A friendly and healthy relationship between builders and consumers will be developed. He further stated that the upcoming Lok Sabha elections in the state will not affect the work at RERA.