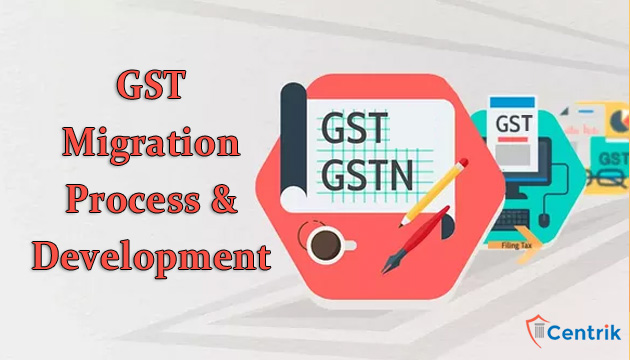 GST Transition provision- section 139 of CGST Act, 2017 read with Rule 16 of GST registration, prescribes the process of migration which can be summarized in the following manner: –

1. As per Rule 16, every person (other than person deducting tax at Source and input service distributor) who is

– Registered under any of existing laws and

shall be required to enroll on the common portal by validating his email id and phone no.

2. The existing tax authorities have already made available the provisional id and password for enrollment on GST common portal. Some of the points are under:

a) One provisional id shall be issued when PAN and State are same.

b) Every State tax authorities shall issue one Provisional id and password based on PAN.

c) Service tax department/excise department shall issue one provisional id where PAN and State are same. It means if any person has ST registrations in multiple States, he would be issued State-wise id.

d) A taxable person who has multiple registrations in the same State under existing State Tax laws shall be given only one provisional id.

3. Using above id and password, the taxpayer would register and submit the details on GSTIN.

4. After enrollment, and on or after appointed date, provisional certificate of registration (PCoR) shall be issued to every such person in form GST REG- 25 incorporating GSTIN.

b) A taxable person who has multiple registrations in the same State under existing laws shall be given only one PCoR.

c) A taxable person who is having centralized registration under service tax laws shall be given one PCoR in the State/Union Territory where he is registered.

5. The provisional certificate of registration shall be valid for a period of 3 months or such period as extended, within which the person is required to submit the information & documents in form GST REG-24.

6. Any person who is registered under existing laws and not liable for registration u/s 22 or 24 of CGST Act, shall make application in form REG- 28 within 30 days from appointed date for cancellation of said registration.

7. If all the information and documents provided in GST REG -24 is found correct and complete, final certificate of registration shall be issued in form GST REG-6.

8. If the information and documents provided in GST REG -24 is not furnished or found not correct and/or incomplete, the proper officer shall issue show cause notice in GST REG – 27.

9. If taxpayer rectify the discrepancy as per GST REG- 27, he shall be given final registration in GST REG – 06.

10. If the proper officer is not satisfied with the explanation or documents, he would cancel the PCoR by issuing notice in GST REG – 26.

a) GST common portal was made live on November 2016.

b) In November, all State Tax Laws authorities were required to generate the provisional id and password state-Wise.

c) From December, CBEC directed all the existing laws authorities to provide provisional id and password to the existing taxpayers.

d)The existing taxpayer was asked to verify and update the detail on common portal using provisional id and password made available by existing tax authorities.

e) Different due dates were given by different States to get migrated.

f) Existing taxpayer (other than person deducting tax at Source and input service distributor) shall be required to enroll on the common portal by validating his email id and phone no.

g) After validating mail ID and Mobile no. an ARN (Application reference no. shall be provided to the taxpayers.