Four things that can impact your savings and increase tax liability 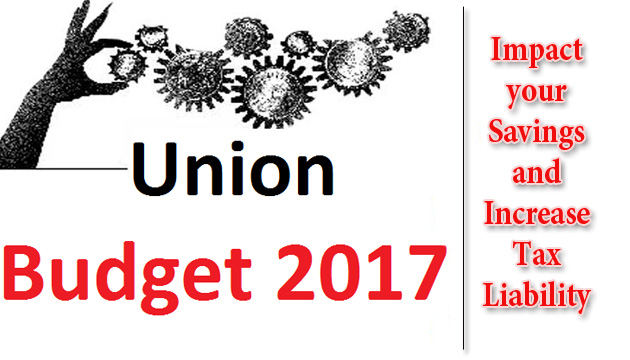 Although the Budget 2017 was pro-poor and some tax sops were also announced keeping in mind the middle class, but still a few amendments will have a negative impact on people after the changes become effective within a few months. For instance, they will increase the tax liability of the rich people.

The present burden of taxation is mainly on honest taxpayers and salaried employees.” Keeping this in view, he tried to disperse the tax liability on everyone so that there is a uniformity in paying tax amongst all.

A) Introduction of additional Surcharge of 10%

The government in the current budget announced an additional surcharge of 10% for salaried employees who are earning more than Rs 50 lakh and less than Rs 1 crore. The taxpayers whose taxable income falls between Rs 50 lakh and Rs 1 crore will not benefit much because the imposition of a surcharge of 10% will not only wipe away the benefit of Rs 12,500, but also it will impose an additional tax burden on such taxpayers.

B) Reduction in rebate limit under Section 87A

Reduction in rebate from Rs 5000 to Rs 2500 under Section 87A has a slightly negative impact where the eligibility limit has been reduced up to 50%. Moreover, the taxable salary limit for claiming such deduction has also decreased from Rs 5 lakh to Rs 3.5 lakh.

In the Budget 2017, section 71 of the Act relates to set-off of loss from one head against income from another. To have best practices, it is proposed to insert sub-section (3A) in the current section to provide that “set-off of loss under the head “Income from house property” against any other head of income shall be restricted to Rs 2 lakh for any assessment year,” as per the Finance Bill 2017.

One the biggest negative impacts will now be held against set off of loss for Income from House Property which now has been capped at Rs 2 lakh per F.Y with effect from 1st April 2018. Your income tax liability may increase because of this capping. Keeping other factors constant, suppose you are earning a rental income of Rs 2 lakh and paying interest of Rs 7 lakh towards the loan, this will result in loss of Income from House Property of Rs 5 lakh. Earlier, you could have set off the entire amount against income from the other heads.

In the current budget, it has been firmly announced that if somebody fails to file one’s income tax returns on or before the due date, one is liable to pay a penalty of certain amount. More precisely, if you file your return after the due date and before 31st December, the penalty is Rs 5000. And if you file returns after 31st of December, the penalty in such case is Rs 10000. Moreover, you will not be able to file returns after 31st of March (of next year). However, if your taxable income is less than Rs 5 lakh, the penalty will be capped at an upper limit of Rs 1,000.