Closing A Company Is Not An Easy Task, Know Clauses To Close A Company

CentrikBlogsBusiness AdvisoryClosing A Company Is Not An Easy Task, Know Clauses To Close A Company 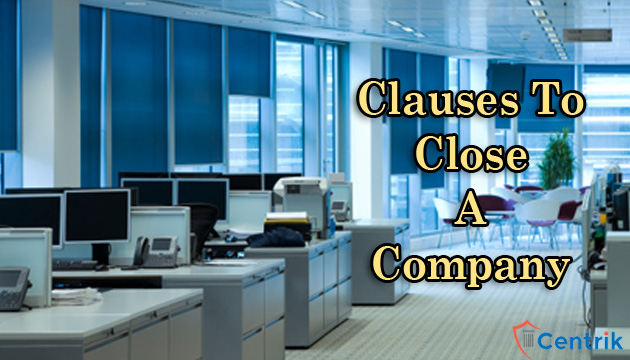 It is better to abandon a sinking and damaged ship than to sink with it. A business may need to be closed for many reasons that may be due to business failure or any other unavoidable circumstances.

Under Companies Act 2013, A Company Can Be Closed In Two Ways

Winding up is a tedious process and can be done either voluntary by calling up a meeting of all stakeholders and passing a special resolution or can be done on the order of Court or Tribunal. Strike Off” mode was introduced by the MCA to give the opportunity to the defunct companies to get their names struck off from the Register of Companies. On 27th December 2016, MCA has notified new rules i.e. Companies (Removal of Names of Companies from the Register of Companies) Rules, 2016 prescribing rule for winding up or closure of private limited company under companies act 2013. By releasing the form STK 2, ministry of Corporate Affairs has brought the Section 248- 252 of 2013 act into force.

This is the most awaited procedure that got active again on 5th April 2017. This procedure was introduced in Section 248 of Companies Act 2013.

Fast Track exit can be done in two ways:

The registrar may strike off the name of Company on its own if:

The Registrar sends a notice (STK-1) of his intention to remove the name and seeks the representation of Company in 30 days.

Company can also move an application to Registrar of Companies for striking off the name by filing form STK-2 along with a fee of Rs 5000/-. Once form is filed, the Registrar has power and duty to satisfy him that all amount due by the company for the discharge of its liabilities and obligations has been realized. ROC can also issue a show cause notice in case of default in filing returns or other obligations.

After above formalities, ROC issues a public notice and strike off the name of Company after its expiry. Note: The form is in approval route. Therefore, concerned ROC can ask for the completion of the fillings.

Note: This form must be signed by a practicing CA or CS