UPRERA: RERA Authority may take over the unfinished project 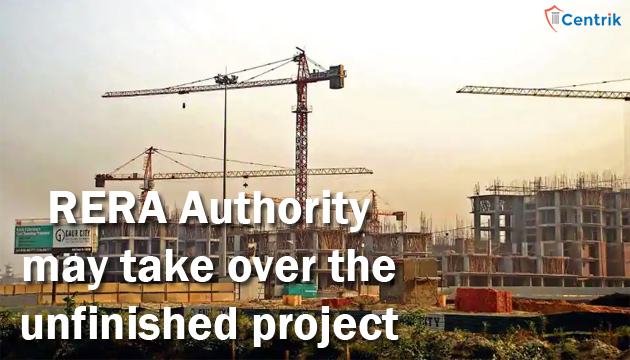 The UP RERA was lacking behind by way pendency of complaints but September 4 it has conducted a forensic audit of over a dozen builders facing fund diversion allegations.

Now the UPRERA is taking big steps to teach a lesson to errant Builders as it is going to review a huge no. of projects that are delayed over 3 to 6 years in the upcoming months. The authority is also planning to cancel the RERA registration or take over the projects if the concerned builders don’t come around finishing the projects.

The show because notice will be issued as to why the registration should not be canceled or take over by RERA, if the builder fails to complete or fails to show a willingness to deliver or if the builder is absconding or in jail.
There will be several options with the authority either a project can be handed over to the buyer’s association to complete it or induct a third party by getting in a co-developer, or it may ask NBCC or any other public sector undertaking to complete to take over and complete the project. Part funding will be done by the buyers or in some cases the money will be raised by sending the project in the auction. By this way, RERA may be able to deliver the major no. of projects by the end of December 2019.

In a meeting help a few weeks back where UPRERA had ordered several builders to speed up the completion over 21,000 apartments in residential projects by developed by Logix group, Today Homes, Rudra Buildwell, Omaxe, Supertech and  Mascot Homes.

In the month of October in 2018 Authority for the first time has taken a step ahead and had asked the homebuyers of Subhkamna Tech Home to come up with a proposal to complete the project on their own by the way of making the association. As the project was to be delivered in 2014 and 70% work was completed by the builder and science then the builder left the project abandoned. However, the proposal could not take an actual shape due to the intervention of NCLT as the builder failed to pay the due of over 2cr to its contractors.

Section 8 of the Real Estate (Regulation and Development) Act, 2016 empowers Authorities to take over the incomplete project to facilitate its completion. However, this provision can be implemented in a few situations only.

This is a commendable move by the authority and this will help the aggrieved home buyers who are waiting for a long for their booked dream homes.