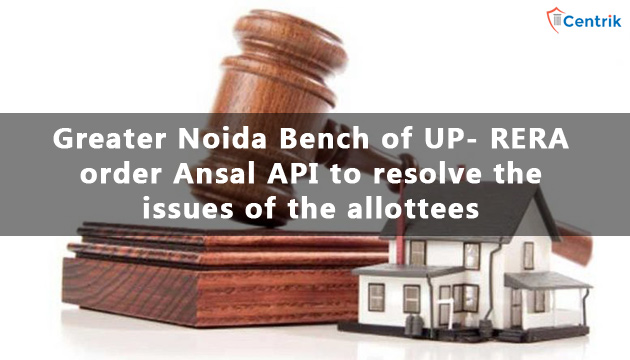 UPRERA: Uttar Pradesh RERA started its mechanism of dealing with RERA complaints well before than many other States and now it has extended its arms by setting up a bench at Greater Noida as well, wherein all of cases pertaining to NOIDA, Greater NOIDA, Ghaziabad i.e. West UP will be heard by the Greater Noida bench.

In the cases against Ansal API Group one of the member Mr. Balwinder Singh has ordered Ansal Properties & Infrastructure Pvt. Ltd. to dispose off the grievances of the allottee within a week. Further, the authority also stated if Ansal would not comply with its direction then they will have to face repercussion of it.

In the aforesaid complaint, the allottee have booked apartment and plot with Ansal API Township in Sultanpur road in the year, 2008 and till date possession has not been handed over. Some allottees on the other hand had booked Villa in the year 2013-2010 they have also not been handed over possession of the same. Representatives of Ansal have agreed before the bench that they will resolve the issue within weeks’ time with the respective allottees.

The allottee also informed the court that the flats which fall under EWS and MIG category their super area have been reduced. Ansal had promised that it will take appropriate steps to resolve the issues but nothing happened till date. Mr. Balwinder Singh member of Greater Noida bench has stated it will hear all the related matter after 15 days.

All above is reaching to the outcome that, UPRERA is strengthening its modus-operandi by taking the RERA complaints on daily basis and very soon all the pending matters will be streamlined. Further, this is obviously not a good news for the Builder as after the establishment of Greater Noida Authority they don’t have enough time to escape from their obligations.

Conclusion: By all above we can reach to the outcome that in such cases where the money has been gulped by the builder and no construction activity is being carried out, the RERA Authority is the right door to knock for the justice as it was specifically enacted with the sole motive to safeguard the interest of the home-buyers.