Suo Moto Removal of Name of Company by registrar 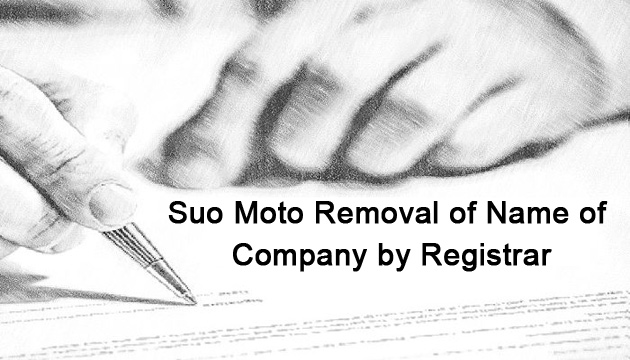 Section 248 of the companies Act 2013 deals with suo-motu removal of name of the companies from the register of companies maintained by Company registrars. As per this section, if the registrar has reason to believe, it can remove company name from registrar after giving opportunity of being heard.

Where the Registrar has reasonable cause to believe that—

(a) a company has failed to commence its business within one year of its incorporation; or

he shall send a notice to the company and all the directors of the company, of his intention to remove the name of the company from the register of companies and requesting them to send their representations along with copies of the relevant documents within a period of thirty days from the date of the notice.

The Registrar shall give a notice in writing in Form STK 1 which shall be sent to all the directors of the company at the addresses available on record, by registered post with acknowledgement due or by speed post.

The notice shall contain the reasons on which the name of the company is to be removed from the register of companies. The notice shall seek representations, if any, against the proposed action from the company and its Directors along with the copies of applicable documents within a period of thirty days from the date of the notice.

The Registrar of Companies shall, at the same time inform the concerned regulatory authorities regulating the company i.e the Income-tax authorities and other authorities having purview over the company, about the proposed action of striking off the names of such companies. The registrar of companies shall seek objections, If no objections are received within the time, it shall be assumed that they have no objections to the proposed activity of striking off the name .

Cancellation of Certificate of Incorporation

Where a company stands dissolved under section 248, it will on and from the date specified in the notice, stop to operate as a company and the Certificate of Incorporation issued to it shall be deemed to have been cancelled.