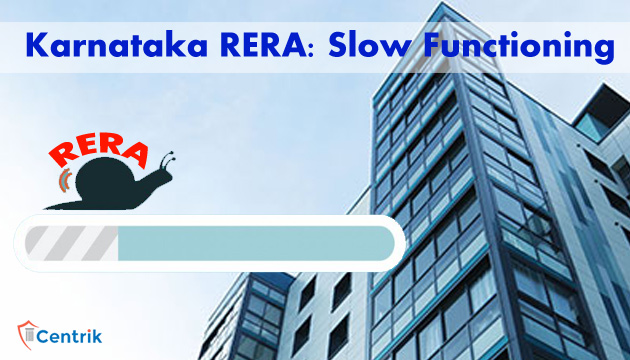 The Real Estate (Regulation and Development) Act, 2016 was implemented with a view to standardize business practices and transactions in the real estate sector to ensure consumer protection.

Karnataka had been the second State to implement the RERA Rules within its jurisdiction however the trailblazer has seemed to have lost its steam. Karnataka Real Estate Regulatory Authority (KRERA) has fallen within the vices of bureaucratic hurdles since its opening. It has become a glorified registry for development projects and has failed to deliver the justice sought by the home buyers.

The KRERA is shouldering the disappointed hopes of not only the Buyers but has failed to implement a proper system for project approval of the Developers. The authority has till date approved 600 of the 1600 applications thus far made.

With no adjudicating officer and permanent staff to function the helm to take up the KRERA duties rests with retired revenue officers. Various difficulties as alleged by the Buyer being; complainants are not being registered by the authorities, a more developer biased approach. The Authority has been reduced to a ‘project approval body’ and has failed to fulfil its adjudicating duties thereby creating a very tense situation between Buyers and Developers.

Trivial errors on the website; such as the registered Developers name not being mentioned, does not inspire much faith in the functioning of the Authority. As per the rules, application for registration of project should not take more than 30 days. As a result the number of applications is cumulatively increasing (as per figures 5000 ongoing projects are eligible to be registered.) A similar state of affairs effect to disposal of complainants with KRERA (having received 85 complainants and none of them has been disposed as per rules it should be disposed of within 60 days.)

The present status of KRERA does not inspire much confidence and its lethargic functioning comes at a public cost.