Roles and Responsibilities of a Company Secretary 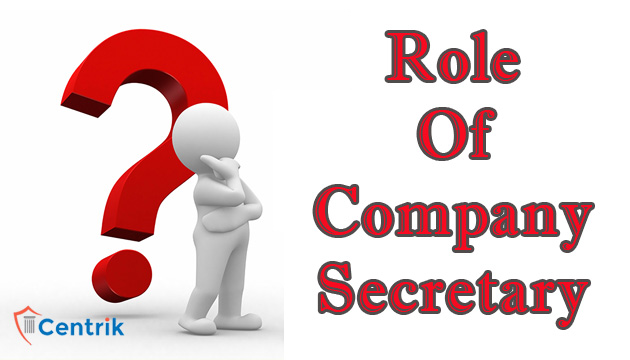 In the contemporary business scenario, a company secretary ranks among one of the top brasses in the company. He is the one responsible for smooth functioning of the administration process in the organisation. Since it’s one of the top positions in the organisation, his roles and responsibilities too are tedious, complicated, and require channelized efforts to be executed properly. In the past few years, ever since the Companies Act 2013 came into being, role of a CS in a company has become all the more important and even his position has gone several notches higher.

Here are a few roles he performs in a company:

A CS is the one who verifies whether or not a company is complying with certain guidelines and laws mentioned in the memorandum of the company for smooth monitoring and functioning of the said organisation. This role of his falls under Section 204 of the Companies Act, 2013. It’s not merely a role; the Act clearly states that it is the ‘duty’ of the CS to perform such audits of listed and prescribed companies.

2. Acting as an inter and intra company link

A Company Secretary acts as a channel of communication between the Board of Directors, investors, and authorities responsible for regulation and functioning

CS is not just a link between various entities in the company, he is also the guide who advises the directors and the chairman on their role and powers in the company

Since a CS is well versed with the laws of the company, he often provides legal advices to the executives. And once the matter goes in the court of law, he is the one who guards the rights of the company by seeking legal advises from those who have a command over the subject.

Apart from these roles and responsibilities a CS is also expected to adhere to certain legal aspects which include following:

While a CS does mostly legal works and oversees various issues related to it, he also has to maintain records and information of members, directors, shares, investors and etc.

As mentioned already, ever since the Companies Act, 2013 came into effect, a CS has got more powers and his roles and responsibilities have become more direct and clear. Under section 203 of the same act, the companies are now required to appoint whole time managerial personnel depending on the category of the company as prescribed by the government in centre. This has been done to ensure corporate regulation and efficient governance. What’s noteworthy here is the fact that apart from the appointment of the CEO and CFO, the law also requires the companies to have a Company Secretary – goes on to explains how important a CS is in the modern times.

For more information about Companies Law and legal services visit our website www.centrik.in