Rights of Homebuyer in Case of Cancellation by the Builder 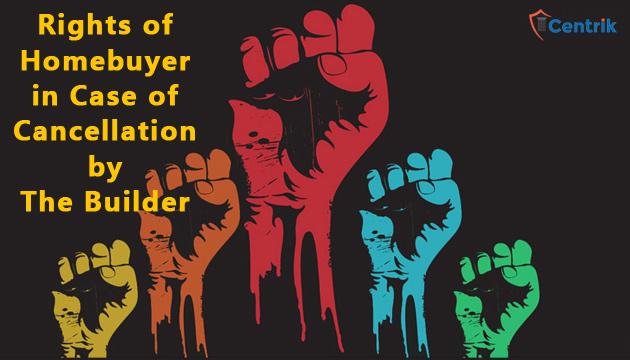 Urbanization along with it brought the issue of non- availability of space. This led to the market of skyrocketing societies built and sold by the builders. This seemed as lucrative investment also to many buyers. Now, in order to attract more buyers and build trust the builders started laying out a scheme wherein you pay according to the stage of construction commonly known as construction linked payment plan. The issue that cropped up in such situation was where the builder kept raising demands but failed to construct anything substantial as promised. In such case the buyers also vehemently denied to honor the demands raised. The builders started acting smart and cancelled the allotment on this pretext but never returned the money collected from the buyers.

The Real Estate development and Regulation Act, 2016 came into force in the year 2016 with enactment of few provisions while the full act became operative in the year 2017. This brought a ray of hope for the aggrieved home buyers but the dilemma that almost all of them faced in case of cancellation was that they do not fit into the definition of “allottee” as laid down in Section 2(d) of the act. The fact that needs to be addressed is that the whole process of booking and payment is a valid contract consisting stages of offer, acceptance and consideration. So, when cancellation takes place there are two major factors. First the whole chain has to be reversed because cancellation in itself means putting both the parties back into their original positions except the earnest money which comes with the relative factor of forfeiture. The second that the cancellation can only be done as per the agreed terms of the signed agreement.

This balance of rights has been acknowledged by the legislature in the newly implemented RERA act. Section 11(5) of the Act …”The promoter may cancel the allotment only in terms of the agreement for sale: Provided that the allottee may approach the Authority for relief, if he is aggrieved by such cancellation and such cancellation is not in accordance with the terms of the agreement for sale, unilateral and without any sufficient cause” clearly lays down that the promoter has the right to cancel the agreement but only as per the agreed terms and in case of any dispute the section provides remedy of filling a complaint before the appropriate Authority.

Further, a thorough reading of Section 11(5) along with section 31 clearly gives room for filling a complaint in case of cancellation by the builder. Section-31 of the act under its ambit brings any sort of grievance that a buyer has from the builder. The dilemma with regard to the definition of allottee also does not suffice as once you have been allotted the property and you have paid the demands raised a cancellation does not expel you from the scope of it till the time the paid money is returned and the buyer is put back into the original position.

Thus, the homebuyers who have faced this issue of cancellation and still do not have any remedy in their hands have RERA to their rescue. Builders in the recent past have done everything in their capacity to cheat and fraud the naïve homebuyers. The legislature while implementing the Act has applied its mind to worst of situations and have tried their best to cover every situation of injustice. Places where there is still doubt or ambiguity the newly implemented RERA authorities are trying their best to establish precedent where rights of both the parties are balanced.