Retroactively Application of RERA Act in lieu of False Advertisements 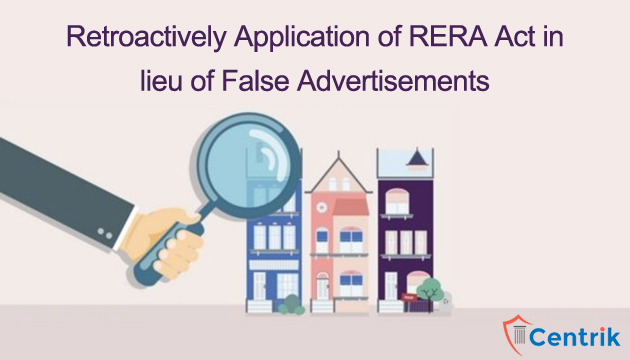 Recently, MahaRERA Appellate Tribunal gave its much-awaited order in writing, in favor of home buyers by setting aside the earlier order by MahaRERA that Section 12 of RERA does not act retrospectively.

MahaRERA Appellate Tribunal gave order against Bombay Dyeing and Manufacturing Co. Ltd. by stating that section 12 refers obligation to the developers to refund the amount paid and compensation in lieu of damage and loss caused with the reason of false advertisement, even when sales agreements were negotiated long before the Law came into force, it would apply retroactively.

The home buyers filed complaints in MahaRERA against the promoter because they failed to give the possession of the flat till 2017 and also failed to render amenities as assured to the allottees which were published in broacher, advertisement, and prospectus. Thus, the promoter committed a breach of Section 12 and section 18 of RERA.

MahaRERA observed that Section 12 of RERA does not act retrospectively and Section 12 is not attracted to the present transactions between parties which took place in the year 2012-13 much prior to the enactment of RERA.

The home buyer had challenged the January 9, 2019 order of MahaRERA in the Appellate Tribunal.

The court HC’s conclude that RERA has been framed in the public interest thus, section 18 would apply equally and retroactively or ‘Quasi-Retroactively’.