RERA: Revocation of RERA Registration of the Builders 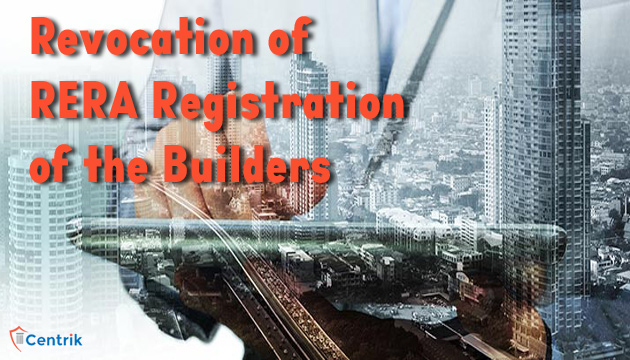 The Real Estate (Regulation and Development) Act, 2016 started spreading its root from 1st of May in 2017 by directing all the states to make rules and regulations for governing the Real Estate Sector of the country, whereby all the promoters were directed to get there ongoing and new projects registered with the authority with 3 months.

The RERA Authority act as a supervisor and regulator for the real estate sector, hence if the project is not registered then it is not possible for the authority to compel the promoters for following the rules and norms.

Now coming to the revocation and cancellation of the registration the Authority reserves the right to revoke the registration granted to the project on receipt of a complaint or suo moto or on the recommendation of the competent authority under the following circumstances: –

This will be an injustice to the promoters if the registration is revoked by the authority, hence the Authority is bound to give 30 days’ notice in writing, stating the grounds on which it is proposed to revoke the registration, and has considered any cause shown by the promoter within the period of that notice against the proposed revocation.

If found guilty of any of the offences the authority instead of revocation of the registration may impose further terms and conditions as it thinks fit to impose in the interest of the allottees, and any such terms and conditions so imposed shall be binding upon the promoter.

The Act has provided every means and powers to the Authority to control and regulate the Real Estate Sector of the country.