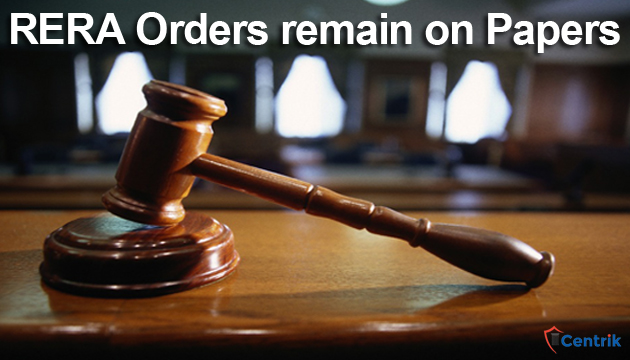 The RERA Authorities have been set up in various states across the country with their respective state rules and regulation. The authorities have been diligently disposing of the case wherein the MahaRERA, MP-RERA led the country the disposing of the maximum number of cases followed by the other states such as Haryana, Uttar Pradesh etc. Maha-RERA led the country in terms of disposal of complaints by issuing over 1,000 orders.

The authorities of most of the states have passed numerous orders but none of them have been executed in reality. The orders remain on paper and developer/ promoters have not complied the order, since no deterrent action has been taken till date. It’s been more than 9-12 months the orders have been passed but no actions have been taken by the authorities with respect to their execution. A section of the homebuyer feels issuing orders without ensuring their execution was inconsequential.

Homebuyers are hustling with authorities with respect to the execution of the order. Some of the instances are such wherein, Maha-RERA issued a warrant in last year against the developer and directed the collector to ensure recovery of Rs 37.94 lakh approx. as part of refund with interests within three months. More than six months have passed since the order was issued, despite several communications with the collector’s office but nothing has happened till date.

In Uttar Pradesh RERA Lucknow bench has also passed various order wherein in the order was passed in 2018, the allottee filed execution petition as well however till date no action has been taken by the authority.

The RERA authorities must be given wider powers with respect to the execution of the order. Delegating the powers to the administrative body is only jeopardizing the interest of the homebuyers. Since the RERA has been enacted for the purpose of regulating the real estate sector then all the powers with respect to registration, complaint, and the execution must be with RERA authorities only. Now looking into the present scenario RERA Authorities must take coercive action against promoters who have failed to comply with the orders passed by the authority within the prescribed time.