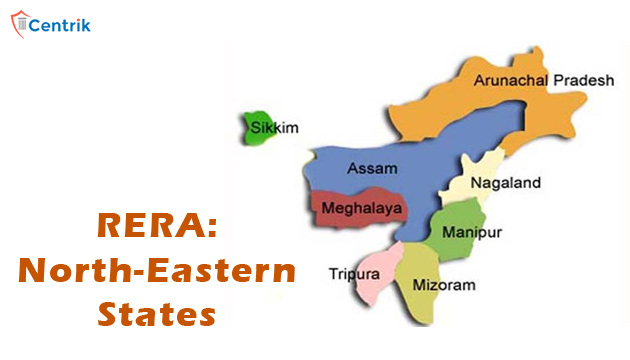 As we are well aware that a well-framed law can be redundant until it has been implemented effectively, therefore, effective implementation is the first step to meet the objective of any Act.

The Real Estate (Regulation and Development) Act, 2016 (hereinafter referred as ‘Act’) which provides proper protection to homebuyers, was enacted by Parliament and states were given powers to notify their respective rules and appoint regulatory authorities. However, few states are still left behind to implement the web portal as required under the Act. As far as the present status is concerned, 22 states have functional web portals under the Act and 32,923 real estate projects have been registered under the Act.

Pursuant to the aforesaid concern the Center has decided to send a special team to six northeastern states later this week to resolve issues pertaining to the implementation of the Act.

An official of the Housing and Urban Affairs Ministry said that the six northeastern states — Arunchal Pradesh, Meghalaya, Manipur, Mizoram, Nagaland and Sikkim have not notified the legislation and its rules so far due to land and other issues.

Though, it is pertinent to quote here that the non-implementation of the Act is caused to some land issues therein that’s why six northeastern states have not notified the Act. Therefore, to resolve all these issues which are coming in the way of enforcing the law, a special team of the ministry will go to these states on October 26-2018.

According to the official, the ministry team will have meetings with officials of these six states and address their concern regarding the implementation of the central real estate law.

The official said that 13 states have so far appointed a permanent regulator, while 14 have interim regulators.

Further, in pretext to the implementation of the Act, there are 25,247 real estate agents have been registered under the Act.

Moreover, with respect to the West Bengal, Mr. Durga Shankar Mishra, Secretary of the Housing and Industrial Regulation Act, 2017 (HIRA) wrote a letter to the state government asking it to repeal its own Act i.e. Housing and Industrial Regulation Act, 2017 stating as Since, there is already a central law on the same subject. Last month, Housing and Urban Affairs Minister Mr. Hardeep Singh Puri had also made it clear that there is no ambiguity when it comes to implementation of the central law and states have to conform to it.

Hence, in context to the above, it can be construed that the Real Estate (Regulation and Development) Act, 2016 is being implemented very smoothly and promptly. Since the objective of the Act is to provide the relief to the homebuyers with a time-bound manner. Further, it has to ensure the growth of the real estate sector as well and restore the confidence of the homebuyers who had lost their hope to recover their money/possession before the implementation of the Act. Thus, a well begun is half done; a good and planned implementation of the Act would lead to justice and transparency in the real estate sector.