RERA effect on misleading advertiesments by the Builders 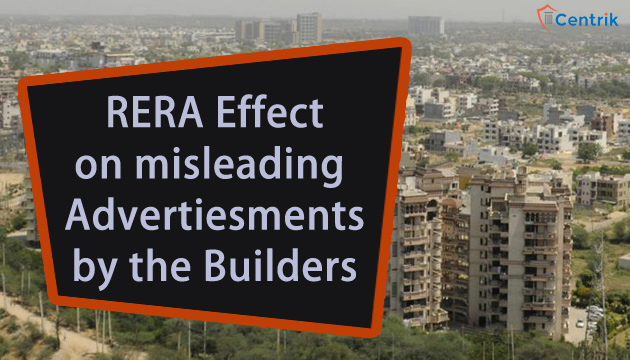 Real Estate in India is a big Industry and every player in it want their brand to be on peak, this brings the tough competition in the market and in the race of beating each other the builders do every possible effort to grab the customer’s attention on their projects and new launches.

As Real Estate sector has witnessed some upward trend (sluggish now) in market in last decade or so, the urge of getting more customers for their projects and launches deviated the developers or builders from their ethical fair practices to the fancy advertisements and fake commitments.

Recently, Real Estate (Regulation and Development) Act, 2016 implemented and attention was also given to ensure that no misleading advertisements should be endorsed in the market to cheat on the buyer’s money. In the month of February, the RERA Authority in Gurugram has become functional and it seems like they are going to hit hard on developers.

Haryana Real Estate Regulatory Authority (HRERA) Chief Mr. Khandelwal made a statement that there should not be any distinction in the luxuries and amenities demonstrated by developers’ in their commercials and advertisement and what they provide on the ground. Misdirecting advertisements may place developers in fatal.

Homebuyers have developed deep sense of resentment about contrasts between what they were guaranteed in real estate commercials and what was conveyed. Builders and Developers have been advertising in alluring way in to tempt purchasers but it remained only false commitments just to muddle on buyer’s money.

HRERA (Gurugram) administrator K Khandelwal said that “Builders who gives false information while promoting their project to bait purchasers will have to face consequences,”. He also added that the notices have already been sent to 3-4 developers.

Dissimilar to before, now the developers can’t accept pre-booking as the RERA was enacted with the sole object to guarantee that developer should not deceive buyers on the basis of incorrect information and no advertisements can be endorsed if the project is not registered with RERA.