RERA: Developer has to display layout/sanctioned plan on his website 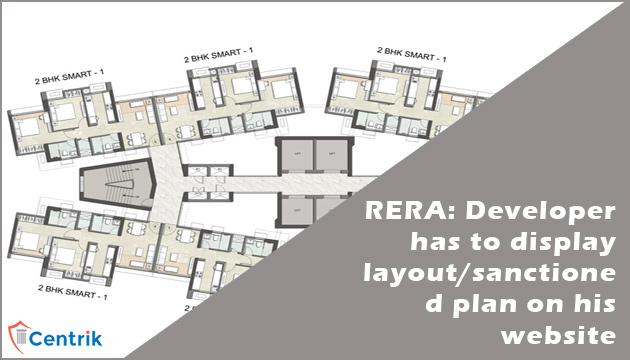 In the era of new Real Estate laws, wherein the provisions of the Real Estate (Regulation and Development) Act, 2016 has made it pretty evident that the builders are now have to be more compliant and they cannot escape their liability of meeting those obligations which are mandatory to be complied with as mentioned in the act.

Lately, the Hon’ble Apex Court recently has made it mandatory for the developers to display/publish the layout/sanction plan of their ongoing projects along with its basic essential information on their respective websites for the benefit of the home buyers who otherwise have to file an RTI under the Right to Information Act, 2005 for procuring the same.

That the Hon’ble Supreme Court while deciding the matter of Ferani Hotels Pvt. Ltd. vs. State Information Commission Greater Mumbai & Ors., held that the duties of the Promoters and Developers are detailed as has been laid down in the Real Estate (Development and Regulation) Act, 2016 under Section 11 which lays down the functions and the duties to be followed by a Promoter, since the information with regards to the same falls under the category of Public Information which should be made available in the interest of the home buyers. That the Hon’ble Supreme Court while eyeing on Section 11 noted that as per Section 11 (1) the promoter/developer has to create his page on the website of the Real Estate Regulatory Authority and define all the details of the project being developed by him, head under head as defined under Section 4 (2) of the Act. Further in consonance to Section 11 (3) of the Act, the Promoter/Developer has to make available to the home buyers the layout/sanctioned plans of the project along with its specification and the approval by the authority.

That it was also held that the main aim of the Act is to bring transparency between the promoter/developer and the home buyer. That the dictum passed by the Hon’ble Supreme Court was done keeping in view the plight of the home buyer, who otherwise have to run from pillar to post for the purposes of gathering information with regards to the project they had invested in. That further in order to curb the rampant violations being exercised by the promoters/developers such a direction was very much in need.

Now that the Hon’ble Supreme Court has made it quite clear, there is a sigh of relief for the home buyers as they can have the information with regards to the project from the scratch before them upon the RERA website. Nonetheless in the event of any violation being committed by the builder, the home buyer always have an option to approach RERA.