Recovery of Money in a Speedy Manner 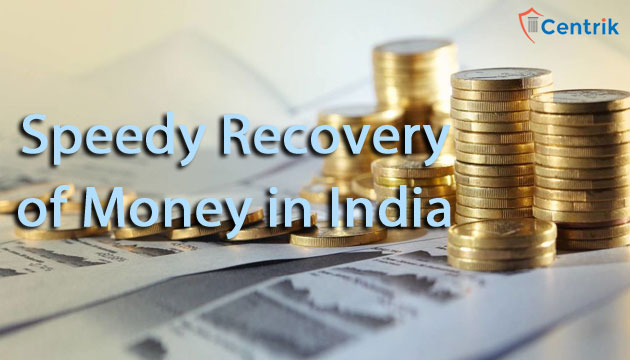 Transaction nowadays involves huge sums of money in the form of consideration, and money matters are a sensitive issue for everyone involved in the business as nobody would want to leave or lose their hard-earned money like that. But there have been instances where recovery of money lent or invested has been lost or was difficult to recover. India developing as it is have seen the number of business transactions expanding rapidly and with that number of cases involving the recovery of money.

Debt, as defined under Insolvency and Bankruptcy Code of 2016 (The Code), is as a liability arising with respect to any claim which is due from any person. The term debt is further classified into two heads i.e. Financial and Operational debt. Financial debt is something which is solely based on a financial contract and is credit-based transaction while an operational debt is related to payment of dues giving rise towards a future payment from the transaction of operations, the term also expands to include goods supplied or services rendered.

WHEN DOES A DEBT BECOME DUE?

A debt becomes due when the default occurs. A default is said to have occurred when a debt or its installment remains unpaid wholly or partly by the debtor. Non-payment is calculated from the day debt becomes due and payable in accordance with the provisions of the law in force. In the event of default and debt becoming due the Code sets out the process for initiating corporate insolvency resolution process (CIRP) against the debtor. In order to initiate CIRP against a corporate debtor, a person has an option to approach NCLT and file an application as per the provisions of the Code.

WHO CAN FILE AN APPLICATION FOR RECOVERY OF DEBT?

CONCLUSION: The number of people struggling against bad debts is considerably high, which along with tormenting creditors also creates a negative impact on the economy altogether. Though it can be said that the Code has been able to resolve cases of non-performing debtors, but chances of improvement are always there and awareness among a general public still lacks as people are not aware of the remedies that can seek in order to recover their money. IBC seems to the dawn of hope for all aidless creditors who have been suffering because conventional laws failed to yield speedy and satisfactory results.