Provisions under RERA for structural defect & poor quality of construction 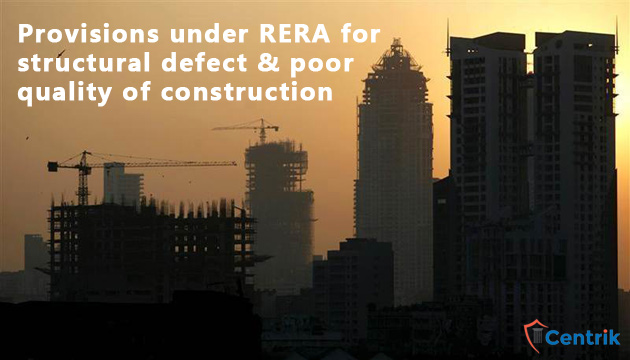 The one of the most concern in the Real Estate which everybody has been seeing is the quality of construction. Before the enactment of Real Estate (Regulation and Development) Act, the builder was not bound to the any statutory liability with respect to the quality of construction material once the possession of the flat was handed over and the allottees were forced to rectify the structural defects by spending the amount of their pocket despite they already paid their hard earned money in the project of the builder.

However, The Real Estate (Regulation and Development) Act, 2016 has eradicated such problems and makes the liable to the builder for any such defect even after the five years from the date of handing over the possession to the allottees. Section 14(3) of the Act provides:

Section 14 (3) of the Real Estate (Regulation and Development) Act, 2016  contains the provisions of “any structural defect or any other defect in workmanship, quality or provision of services or any other obligations of the promoter as per the agreement for sale relating to such development is brought to the notice of the promoter within a period of five years by the allottee from the date of handing over possession, it shall be the duty of the promoter to rectify such defects without further charge within thirty days, and in the event of promoter’s failure to rectify such defects within such time, the aggrieved allottees shall be entitled to receive appropriate compensation in the manner as provided under this Act”.

Thus, in the context of the above, it can be construed that section 14(3) of the Act provides the remedy to the allottees in case of any structural defect incurred in next five years from the date of giving the possession; the builder/promoter is liable to rectify the defect at his own cost. Further, in the event of promoter’s failure to rectify such defects within 30 days, the aggrieved allottee is entitled to receive appropriate compensation, however, the compensation is to be decided by the Authority.